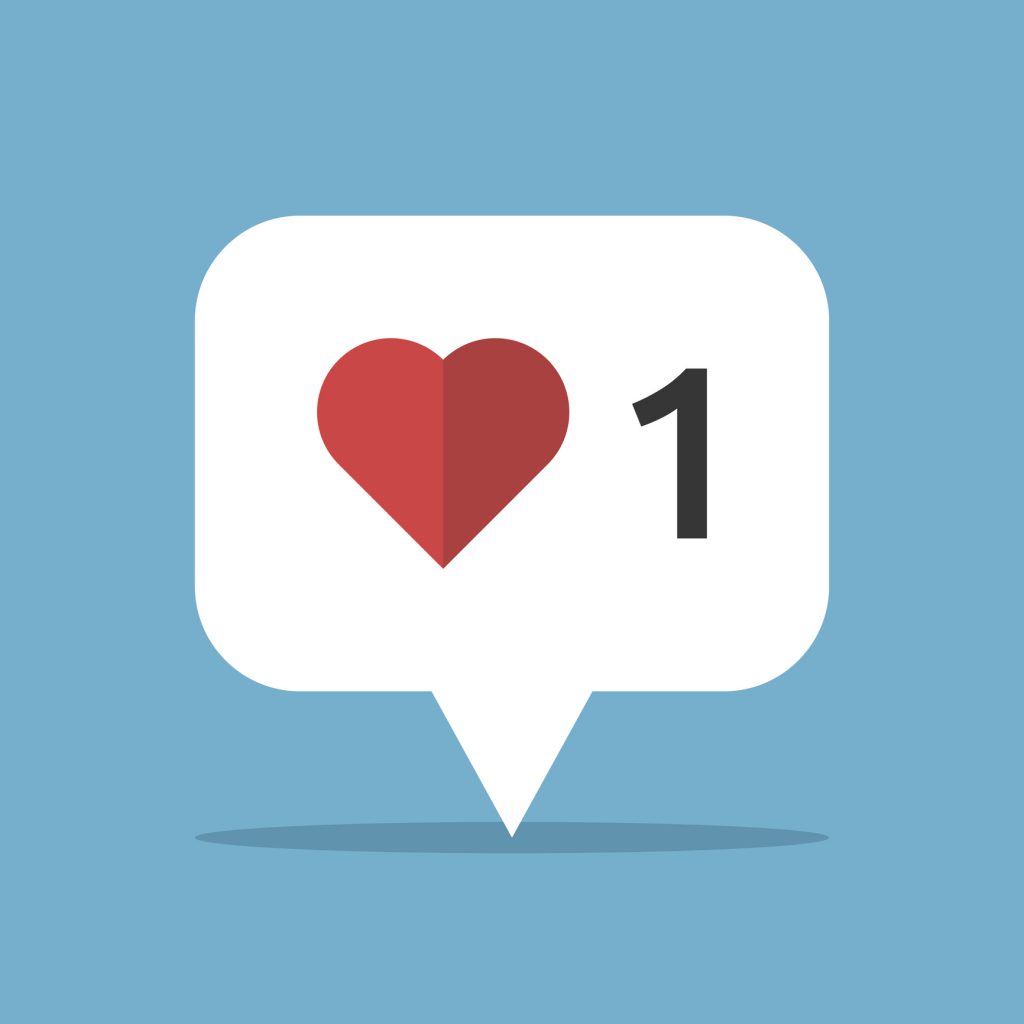 The same brain circuits that are activated by eating chocolate and winning money are activated when teenagers see large numbers of “likes” on their own photos or the photos of peers in a social network, according to findings from a study in which researchers scanned teens’ brains while they used social media.

The 32 teenagers, ages 13-18, were told they were participating in a small social network similar to the popular photo-sharing app, Instagram. In an experiment at UCLA’s Ahmanson–Lovelace Brain Mapping Center, the researchers showed them 148 photographs on a computer screen for 12 minutes, including 40 photos that each teenager submitted, and analyzed their brain activity using functional magnetic resonance imaging, or fMRI. Each photo also displayed the number of likes it had supposedly received from other teenage participants — in reality, the number of likes was assigned by the researchers. (At the end of the procedure, the participants were told that the researchers decided on the number of likes a photo received.)

“When the teens saw their own photos with a large number of likes, we saw activity across a wide variety of regions in the brain,” said lead author Lauren Sherman, a researcher in the brain mapping center and the UCLA branch of the Children’s Digital Media Center, Los Angeles.

A region that was especially active is a part of the striatum called the nucleus accumbens, which is part of the brain’s reward circuitry, she said. This reward circuitry is thought to be particularly sensitive during adolescence. When the teenagers saw their photos with a large number of likes, the researchers also observed activation in regions that are known as the social brain and regions linked to visual attention.

In deciding whether to click that they liked a photo, the teenagers were highly influenced by the number of likes the photo had.

“We showed the exact same photo with a lot of likes to half of the teens and to the other half with just a few likes,” Sherman said. “When they saw a photo with more likes, they were significantly more likely to like it themselves. Teens react differently to information when they believe it has been endorsed by many or few of their peers, even if these peers are strangers.”

In the teenagers’ real lives, the influence of their friends is likely to be even more dramatic, said Mirella Dapretto, professor of psychiatry and biobehavioral sciences at UCLA’s Semel Institute of Neuroscience and Human Behavior.

“In the study, this was a group of virtual strangers to them, and yet they were still responding to peer influence; their willingness to conform manifested itself both at the brain level and in what they chose to like,” said Dapretto, a senior author of the study. “We should expect the effect would be magnified in real life, when teens are looking at likes by people who are important to them.”

The teenagers in the study viewed “neutral” photos — which included pictures of food and of friends — and “risky” photos — including of cigarettes, alcohol and teenagers wearing provocative clothing.

“For all three types of photographs — neutral, risky and even their own — the teens were more likely to click like if more people had liked them than if fewer people liked them,” said Patricia Greenfield, a UCLA distinguished professor of psychology, director of UCLA’s Children’s Digital Media Center, Los Angeles, and the study’s other senior author. “The conformity effect, which was particularly large for their own pictures, shows the importance of peer-approval.”

These brain regions are involved in decision-making and can inhibit us from engaging in certain activities, or give us the green light to go ahead, Dapretto said.

Seeing photos that depict risky behavior seems to decrease activity in the regions that put the brakes on, perhaps weakening teens’ “be careful” filter, she said.

All materials have been made publicly available via Open Science Framework and can be accessed at https://osf.io/atj4d. The complete Open Practices Disclosure for this article can be found at http://pss.sagepub.com/content/by/supplemental-data. This article has received the badge for Open Materials. More information about the Open Practices badges can be found athttps://osf.io/tvyxz/wiki/1.%20View%20the%20Badges/ andhttp://pss.sagepub.com/content/25/1/3.full.

This was an intriguing study and it makes very sense. It is clear that reinforcement is a big motivating factor. It is huge that evidence from brain scans indicates that adolescent inhibition are impaired by reinforcement. It leaves me wondering and gives me more knowledge explaining the behavior of the students at my school. The reinforcement factor has had dramatic impacts the choices students make.

Interesting. I always hated social media and I finally got the guts to delete all my social media recently. Honestly, my life is so much better. I don’t feel influenced by people I never even talk to, like this study has shown it does. Technology is so powerful and useful, but it seems that social media can be bad on our mental health.

thankyou so much, this article really helps a lot on my research.

None of this is earth shattering news, in fact most of the behaviour is typical, albeit exacerbated, by using social media in excess. Yes, it is a real issue of concern, not disputing the severity at all. Sure the leting down of inhibitions, due primarily to intuiting there were no real consequences/risks, would be inviting just to see how it feels to be free from age appropirate and unacceptable behavior as learned through consequence of actions.

Using them in a Milgrim type situation may have been traumatic; being as acceptence is key at that age. Telling them the truth will not erase that emotional response they felt. Hopefully, they may realilze such 1 dimensional thoughtless behavior sucha as likes/dislikes is irrelevent in a 3-dimentional reality.
So, most of us already knew this,(it started with too much TV wathcing.)therefore, what if anything did this studylead the researches to determine required more aggressive or expansive study of how to limit the impact of social media and re-inforce that it’s just a distraction and life is a co-operative interataction where we learn to counter, respond and understand how to relate and be independent, strong and compassionate for real. Instead of becoming anti social, depressed and vulnerable, which would include violence because they use social meadia in excess reinforcing a lack of the skill set to navigate life in 3-dimensions and learn to be strong, with the help of parent teachers and peers. Social media is useful, but it’s not survival and if it is, then someone is missing the boat or a new paradigm has preented itself and we are straddeling the void. (sorry long question and hardly read in as a psychologist)

Why limit it to teenagers? The same issues that social media causes for teenagers are also present in adults.

I looked into the issue of the effects social media has on us. One article I found was written by Caitlin Hoffman on Sept 11, 2019, and it discusses a study from John Hopkins University on the effects increased social media activity has on teens’ mental health. The study found that the longer people spent on social media, the more likely they were to report or display negative effects. The article says that to fix this problem we don’t have to get rid of social media time entirely but rather balance the time spent on those sites. Social media has its benefits as well as problems; it’s a way for friends to keep in touch but could also expose teens to bullying. This study seeks to truthfully inform people of the ill effects of overusing social media. Other studies I’ve read agree with what they are saying: spending too much time online has negative consequences. These social media studies are very relevant as nowadays many teens, and people in general, are using social media, and many also experience problems that could be related to improper media usage. At the end of that article, it quotes Kira Riehm, lead author, Bloomberg School of Public Health: “‘We need to find a better way to balance the benefits of social media with possible negative health outcomes,’ says Riehm. ‘Setting reasonable boundaries, improving the design of social media platforms, and focusing interventions on media literacy are all ways in which we can potentially find this equilibrium.’” As it suggests, platforms could be skillfully developed to help with this issue. Being aware of the media’s effects on us and how we use it can also help. The study here suggests that we may be inclined to like things more out of a desire to fit in than from truly liking the post. So being aware of this phenomenon may help to reduce its influence over us. Studies like these studies respect the dignity of the human person by seeking to bring to light some issues in our culture and help them to fix them. They can inspire people to better use their social media and lead happier lives.
https://hub.jhu.edu/2019/09/11/social-media-teen-mental-health/