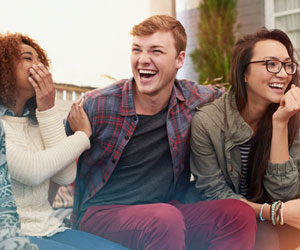 The research shows that people who were able to respond more quickly to general knowledge questions and visual tasks were perceived as more charismatic by their friends, independently of IQ and other personality traits.

“Our findings show that social intelligence is more than just knowing the right thing to do,” says psychological scientist William von Hippel of the University of Queensland in Australia. “Social intelligence also requires an ability to execute, and the quickness of our mind is an important component of that ability.”

Von Hippel and colleagues were intrigued by why some people exude more charisma than others, and wanted to understand the factors that might drive these differences.

“We decided to take a slightly different approach to the problem by trying to get a handle on what enables charisma,” von Hippel explains. “When we looked at charismatic leaders, musicians, and other public figures, one thing that stood out is that they are quick on their feet.”

To investigate whether mental speed might contribute to charisma, the researchers conducted two studies with a combined total of 417 participants. Participants in the studies completed established measures of intelligence and personality.

To gauge charisma, the researchers asked the participants’ friends to rate how “charismatic,” “funny,” and “quick-witted” they were. To measure mental speed, participants then answered 30 common-knowledge questions (e.g., “Name a precious gem”) as quickly as possible. In the second study, they also completed timed tasks that required them to locate a dot or identify a pattern as quickly as possible.

The results showed that participants who were faster on the mental speed tasks were perceived as more charismatic, and this association remained after other factors, such as general intelligence and personality, were taken into account.

The researchers speculate that mental speed may also make it easier to quickly mask an inappropriate reaction and make humorous associations on the spot.

Contrary to the researchers’ predictions, mental speed did not predict other social skills, such as being adept at handling conflict or interpreting others’ feelings.

These studies suggest that social intelligence depends on more than knowing specific social rules or having certain social abilities, like the ability to read people’s facial expressions. While social knowledge and face reading are undoubtedly critical components of social intelligence, this research shows that general mental properties, like mental speed, also play an important role.

Co-authors on the study include Richard Ronay of Vrije Universiteit Amsterdam in the Netherlands and Ernest Baker, Kathleen Kjelsaas, and Sean C. Murphy of the University of Queensland.

This article has received badges for Open Data. More information about the Open Practices badges can be found at https://osf.io/tvyxz/wiki/1.%20View%20the%20Badges/ and http://pss.sagepub.com/content/25/1/3.full.