You know what you’re going to say before you say it, right? Not necessarily, research suggests. A study from researchers at Lund University in Sweden shows that auditory feedback plays an important role in helping us determine what we’re saying as we speak. The study is published in Psychological Science, a journal of the Association for Psychological Science.

“Our results indicate that speakers listen to their own voices to help specify the meaning of what they are saying,” says researcher Andreas Lind of Lund University, lead author of the study. 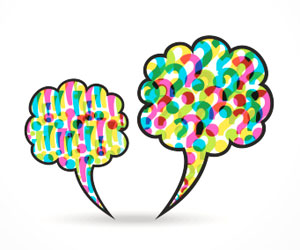 Theories about how we produce speech often assume that we start with a clear, preverbal idea of what to say that goes through different levels of encoding to finally become an utterance.

But the findings from this study support an alternative model in which speech is more than just a dutiful translation of this preverbal message:

“These findings suggest that the meaning of an utterance is not entirely internal to the speaker, but that it is also determined by the feedback we receive from our utterances, and from the inferences we draw from the wider conversational context,” Lind explains.

For the study, Lind and colleagues recruited Swedish participants to complete a classic Stroop test, which provided a controlled linguistic setting. During the Stroop test, participants were presented with various color words (e.g., “red” or “green”) one at a time on a screen and were tasked with naming the color of the font that each word was printed in, rather than the color that the word itself signified.

The participants wore headphones that provided real-time auditory feedback as they took the test — unbeknownst to them, the researchers had rigged the feedback using a voice-triggered playback system. This system allowed the researchers to substitute specific phonologically similar but semantically distinct words (“grey”, “green”) in real time, a technique they call “Real-time Speech Exchange” or RSE.

Data from the 78 participants indicated that when the timing of the insertions was right, only about one third of the exchanges were detected.

Overall, Lind and colleagues found that participants accepted the manipulated feedback as having been self-produced on about 85% of the non-detected trials.

Together, these findings suggest that our understanding of our own utterances, and our sense of agency for those utterances, depend to some degree on inferences we make after we’ve made them.

Most surprising, perhaps, is the fact that while participants received several indications about what they actually said — from their tongue and jaw, from sound conducted through the bone, and from their memory of the correct alternative on the screen — they still treated the manipulated words as though they were self-produced.

This suggests, says Lind, that the effect may be even more pronounced in everyday conversation, which is less constrained and more ambiguous than the context offered by the Stroop test.

“In future studies, we want to apply RSE to situations that are more social and spontaneous — investigating, for example, how exchanged words might influence the way an interview or conversation develops,” says Lind.

“While this is technically challenging to execute, it could potentially tell us a great deal about how meaning and communicative intentions are formed in natural discourse,” he concludes.