People tend to have a distinctive way of talking to babies and small children: We speak more slowly, using a sing-song voice, and tend to use cutesy words like “tummy”. While we might be inclined to think that this kind of “baby talk” is easier for children to understand, new research findings in Psychological Science, a journal of the Association for Psychological Science, suggest that mothers may actually speak less clearly to their infants than they do to adults.

We often try to produce sounds more distinctly when there is a chance a listener won’t understand us — imagine speaking to someone over a noisy telephone connection — and some researchers have proposed that parents do the same thing when addressing children, in an unconscious attempt to help them learn the sounds of the language. Opening your mouth more when saying “ah” to a child, for example, would make it easier for the child to distinguish this sound from others. 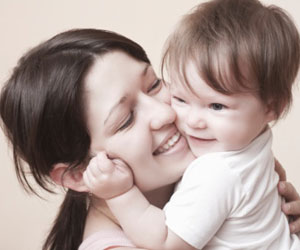 But there has been little scientific evidence available to confirm this proposal. In a truly collaborative effort, two research teams — one in Paris, France and the other in Tokyo, Japan — decided to put the hypothesis to the test.

The researchers first recorded 22 Japanese mothers talking to their children (ages 18 to 24 months) and an experimenter. A team of experts at the Laboratory for Language Development at the RIKEN Brain Science Institute in Tokyo then spent 5 years annotating the 14 hours of speech, marking specific aspects of the speech including the beginnings and ends of consonants, vowels, phrases.

“To our knowledge, this is one of the most finely annotated large corpora of child-directed speech in the world,” said the researchers.

Next, the researchers applied a technique they had developed to measure the acoustic similarity between any two syllables, like ‘pa’ and ‘ba’, ‘po’ and ‘bo’. Because the analysis is automated, the international team was able to examine the118 most frequent syllable contrasts in both the adult- and child-directed speech.

The results were surprising: Mothers spoke slightly less clearly when talking to their child than to the experimenter.

The researchers note that the ways in which they collected and analyzed speech represent a substantively different approach from previous studies, which have typically examined far fewer syllable contrasts, and sometimes in speech samples that were obtained from participants reading predetermined pieces of text.

“By studying all the frequent contrasts in spontaneous speech, we can be confident that we have gained a view of the child’s input that is both comprehensive and realistic,” says Cristia.

The researchers note that their interdisciplinary approach — which drew from developmental psychology, linguistics, and speech technology — provides a promising avenue for gaining a large-scale perspective on the nature of the input that children use to acquire their native language.

Of course, these new findings raise additional questions that Cristia, Martin, and colleagues hope to explore. For example, why are mothers pronouncing sounds less clearly? The researchers suspect they are instinctively focusing on other goals within and beyond language – such as communicating emotions or on engaging the child’s attention — and slightly less-clear pronunciation is an inadvertent consequence of these other goals. And collaborations with other labs in the world will help in answering another fascinating question: Do parents from other cultures do the same thing?