“We found that acting gave children a relatively shallow understanding of a novel math concept, whereas gesturing led to deeper and more flexible learning,” explained the study’s lead author, Miriam A. Novack, a PhD student in psychology at the University of Chicago. 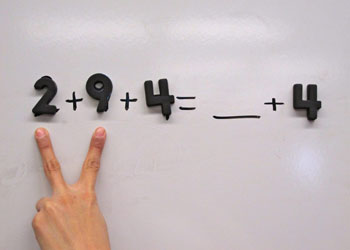 A study from the University of Chicago Department of Psychology showed that use of abstract gestures is a powerful tool for helping children understand and generalize mathematical concepts. Courtesy of Goldin-Meadow lab.

The researchers taught third-grade children a strategy for solving one type of mathematical equivalence problem, for example, 4 + 2 + 6 = ____ + 6.

They then tested the students on similar mathematical equivalence problems to determine how well they understood the underlying principle.

The researchers randomly assigned 90 children to conditions in which they learned using different kinds of physical interaction with the material.

In one group, children picked up magnetic number tiles and put them in the proper place in the formula. For example, for the problem 4 + 2 + 6 = ___ + 6, they picked up the 4 and 2 and placed them on a magnetic whiteboard.

Another group mimed that action without actually touching the tiles, and a third group was taught to use abstract gestures with their hands to solve the equations.

In the abstract gesture group, children were taught to produce a V-point gesture with their fingers under two of the numbers, metaphorically grouping them, followed by pointing a finger at the blank in the equation.

The children were tested before and after solving each problem in the lesson, including problems that required children to generalize beyond what they had learned in grouping the numbers. For example, they were given problems that were similar to the original one, but had different numbers on both sides of the equation.

“Abstract gesture was most effective in encouraging learners to generalize the knowledge they had gained during instruction, action was least effective, and concrete gesture was somewhere in between,” said senior author Susan Goldin-Meadow, the Beardsley Ruml Distinguished Service Professor in Psychology at the University of Chicago. “Our findings provide the first evidence that gesture not only supports learning a task at hand but, more importantly, leads to generalization beyond the task. Children appear to learn underlying principles from their actions only insofar as those actions can be interpreted symbolically.”

In addition to Novack and Goldin-Meadow, co-authors include Eliza L. Congdon and Naureen Hemani-Lopez of the University of Chicago.