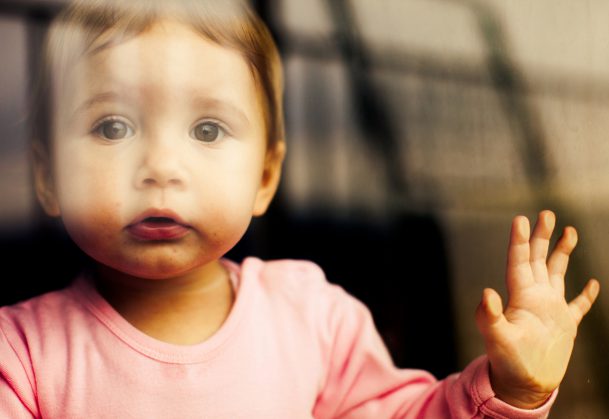 Research shows that babies not only pick up on their mother’s stress, they also show corresponding physiological changes.

“Our research shows that infants ‘catch’ and embody the physiological residue of their mothers’ stressful experiences,” says lead researcher Sara Waters, postdoctoral scholar at the University of California, San Francisco.

“For many years now, social scientists have been interested in how emotions are transmitted from one person to another,” says senior author Wendy Berry Mendes, the Sarlo/Ekman Associate Professor of Emotion at UCSF. Indeed, research in the social sciences has shown that emotions can be “contagious” and that there is emotional synchrony between romantic partners.

Waters, Mendes, and colleague Tessa West of New York University, wanted to extend this research by looking at emotional synchrony in the context of another close relationship: that between mother and child.

“Our earliest lessons about how to manage stress and strong negative emotions in our day-to-day lives occur in the parent-child relationship,” Waters explains.

The researchers recruited 69 mothers and their 12- to 14-month-old infants to participate in the study. Researchers attached cardiovascular sensors to both mother and infant and took baseline recordings from each. After settling in, mother and infant were separated and the mother was assigned to give a 5-minute speech to two evaluators, followed by a 5-minute Q&A session. Some mothers received positive signals from the evaluators, including nodding, smiling, and leaning forward. Others received negative feedback, such as frowning, shaking their heads, and crossing their arms. A third group of mothers did not receive any feedback. Mother and infant were later reunited.

As predicted, mothers who received negative feedback reported greater decreases in positive emotion and greater increases in negative emotion than did mothers in the other two conditions. They also showed signs of increased cardiac stress.

And the infants quickly picked up on this stress response: Infants whose mothers received negative feedback showed significant increases in heart rate relative to baseline within minutes of being reunited with their mothers.

“Before infants are verbal and able to express themselves fully, we can overlook how exquisitely attuned they are to the emotional tenor of their caregivers,” notes Waters. “Your infant may not be able to tell you that you seem stressed or ask you what is wrong, but our work shows that, as soon as she is in your arms, she is picking up on the bodily responses accompanying your emotional state and immediately begins to feel in her own body your own negative emotion.”

The researchers note that there are a variety of different channels through which these emotions might be communicated, including odor, vocal tension, and facial expressions. Waters, Mendes, and colleagues are currently investigating the hypothesis that touch plays an important role in emotion contagion.

Ultimately, these findings shed light on how health and well-being can have long-term consequences, transferring across generations:

“A common question in public health circles is how stress and social environment ‘gets under the skin’ to affect health both at an individual and at a familial level,” says Mendes. “With this admittedly modest study, we show a possible mechanism for how stress is transmitted from parent to child.”

News > Latest Research News > For Infants, Stress May be Caught, Not Taught