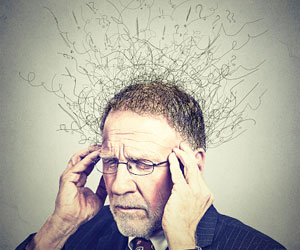 “We all know from personal experience that some people appear to be more prone to lapses of attention than others. At the same time, we know that inattention and distractibility characterize people with a clinical diagnosis of attention-deficit/hyperactivity disorder (ADHD),” says study author Nilli Lavie of University College London.

“This led us to hypothesize that there might be an attention-distractibility trait that all of us have to some degree, and the clinical end of the spectrum is seen as ADHD.”

To investigate whether such a continuous trait exists, Lavie and co-author Sophie Forster had a sample of 174 healthy adults complete computerized tasks that measured their distractibility.

The participants searched brief computerized displays for a “target” letter among a circle of letters, pressing a key as soon as they found it. On 25% of the 384 trials, a distracting image of a well-known cartoon character appeared above or below the circle of letters. This cartoon image had no bearing on the visual search task and participants’ distractibility was measured by the degree to which the cartoon slowed their responses.

After the computerized tasks, the participants completed a validated self-report measure of ADHD symptoms at childhood.

The results showed that participants’ distractibility was associated with the level of ADHD symptoms they reported experiencing at childhood, including both their overall ADHD score and their scores for the two ADHD subtypes (inattention and hyperactive-impulsive).

“Since the correlation of ADHD scores and our objective computerized measure of distractibility was established with adults who performed the task now but reported about ADHD symptoms experienced in childhood, this suggests that distractibility is a trait that is present already in childhood and predisposes people to attention lapses during adulthood, as well,” says Lavie.

In one of the experiments, the researchers compared an easy search (in which the target letter was easy to find among lowercase os) and a harder search (in which the target appeared among similar-looking uppercase letters). The results showed that the more demanding task reduced participants’ distractibility across the board, regardless of their ADHD scores. This suggests that manipulating the attentional demands of a task may be one strategy to increase focus and performance on that task.

“Everyone, including the highly distractible people , who reported higher levels of ADHD symptoms  and who responded up to 41% slower when the cartoon distractor was present, benefited from increasing the task difficulty, which may be contrary to common expectations,” says Lavie.

According to Lavie and Forster, being able to recognize and measure an attention-distractibility trait could help us understand why some individuals seem to be particularly prone to inattentive accidents and errors.

“The discovery of an attention-distractibility trait is important because attention serves as the gateway to all information processing,” says Lavie. “A high level of the attention-distractibility trait is likely to have an impact on a person’s educational and job performance, as well on their ability to focus on daily activities and tasks, such as reading.”

The trait could be “a significant yet underrecognized determinant of general well-being,” the researchers conclude.