The study findings indicate that how parents share dishes, laundry and other domestic duties plays a key role in shaping the gender attitudes and aspirations of their children, especially daughters. 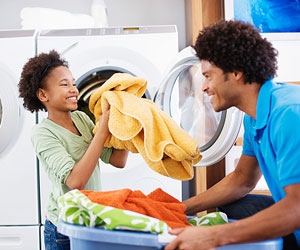 While mothers’ gender and work equality beliefs were key factors in predicting kids’ attitudes toward gender, the strongest predictor of daughters’ own professional ambitions was their fathers’ approach to household chores.

“This suggests girls grow up with broader career goals in households where domestic duties are shared more equitably by parents,” says psychology researcher and study author Alyssa Croft, a PhD Candidate in the University of British Columbia’s Department of Psychology. “How fathers treat their domestic duties appears to play a unique gatekeeper role.”

The study results suggest that parents’ domestic actions may speak louder than words. Even when fathers publicly endorsed gender equality, if they retained a traditional division of labor at home, their daughters were more likely to envision themselves in traditionally female-dominant jobs, such as nurse, teacher, librarian or stay-at-home-mom.

“Despite our best efforts to create workplace equality, women remain severely under-represented in leadership and management positions,” says Croft. “This study is important because it suggests that achieving gender equality at home may be one way to inspire young women to set their sights on careers from which they have traditionally been excluded.”

The study involved 326 children aged 7-13 and at least one of their parents. For each household, researchers calculated the division of chores and paid labor. They also determined the career stereotypes that participants identified with, their gender and work attitudes and children’s career aspirations.

The study found mothers shouldered more of the burden of housework than men, which echoes previous findings. Parents and kids associated women more than men with childcare and domestic work, and girls were significantly more likely than boys to say they want be like adults who take care of kids rather than someone who has a career.

“‘Talking the talk’ about equality is important, but our findings suggest that it is crucial that dads ‘walk the walk’ as well — because their daughters clearly are watching,” says Croft, noting that girls might be learning from an early age to take on additional roles, rather than different roles, compared to boys.

Alyssa Croft explains the study in this video from the University of British Columbia:

Video and researcher photos can be downloaded via Dropbox at: https://www.dropbox.com/sh/d4hv1rdi2zq4s2i/AADp2-3v5JPV_H0E3HOsJtPHa

The article “Dads Who Share the Load Bolster Daughters’ Aspirations”, is a good study about how fathers should take care of their children by showing them how to work in the house. It will help them when they are adults. For carrer’s instead of staying at home and not doing anything besides taking care of their children. Dads should care that if they could do something to help their child’s i assume they would.

Really cool hit me in the heart really inspirational because its a father who love the daughter. Also The mother that are house wives and to everything because of the the sexest behavior