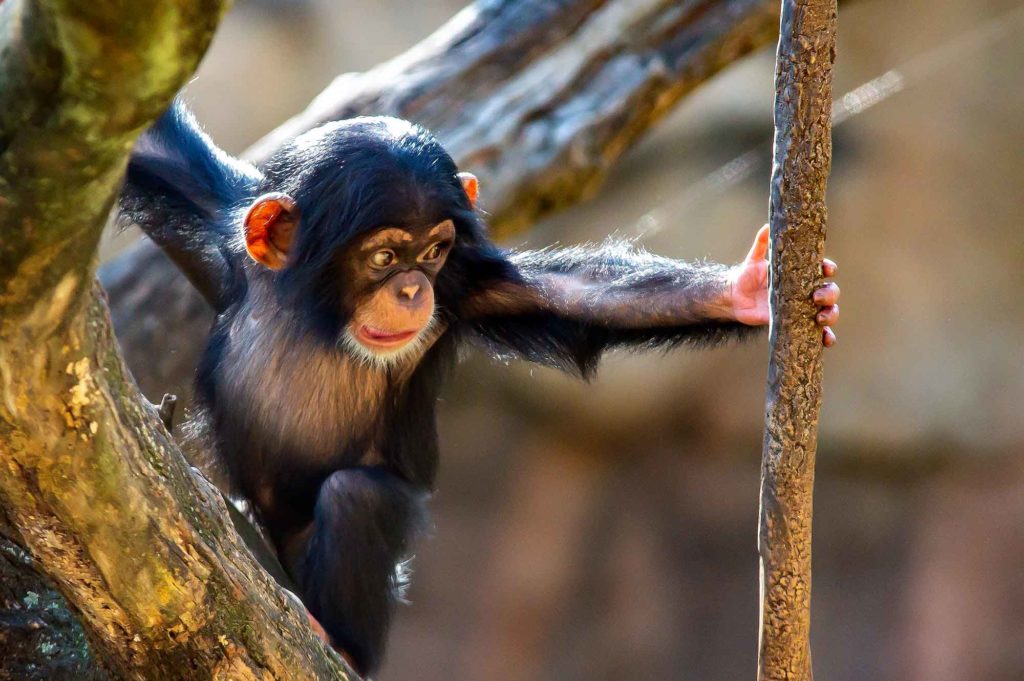 Many important decisions boil down to a choice between the supposed safety of sticking with what we know and the risk of going out on a limb for a chance at getting something even better. Though risk-taking preferences vary between individuals, research with humans points toward several key findings: Young people like to take more risks, males tend toward more risky behaviors than females, and we’re all generally less willing to take risks in situations with more ambiguous outcomes.

Research by Haux and colleagues suggests that these findings also apply to risk-taking in chimpanzees, our closest evolutionary ancestor in the animal kingdom, and that individual chimps’ risk preference is stable and trait-like across situations.

“It’s really fascinating because in humans it’s not clear if someone who is financially risk-taking would also do more risk-taking with something like bungee jumping,” Haux said in an interview. “Our study also suggests that risk preference has deeper evolutionary roots which should be taken into account.”

Haux and colleagues examined the risk-taking behavior of 86 chimpanzees living in sanctuaries in Uganda and Kenya, through a combination of behavioral experiments and observational reports from their human caregivers. The caregivers, who had known each chimpanzee for an average of 12 years in Uganda and 20 years in Kenya, reported on each animal’s specific behaviors and perceived comfort with risk. These behaviors included how frequently the chimpanzee engaged in risky foraging, interacted with snakes, escaped from their enclosure, and competed with other chimpanzees to increase their position in the hierarchy, along with their willingness to interact with strangers.

“Our results showed that chimpanzees’ willingness to take risks appears to manifest as a traitlike preference,” Haux and colleagues write.

One exception to this trend, however, was chimpanzees’ willingness to interact with strangers, which was found to be only weakly related to their other risk-taking behaviors. This supports previous findings suggesting that chimpanzees may process social risk differently than resource-related economic risks, the researchers write.

Fifty-five of the chimpanzees also completed a task that measured their preference for risky and ambiguous choices in an experimental setting. In each trial, they chose a ball from one of two urns. One urn was always safe because it contained two balls filled with one peanut each. In the risky condition, the second urn also contained two balls, but one was filled with two peanuts and the other with nothing. In the ambiguous condition, the balls in the second urn still contained two rewards or nothing, but the urn was entirely opaque, hiding its contents from view. This made it more difficult for the chimpanzees to infer probability information about the reward they would receive, Haux said.

“Structural similarities in risk preferences of humans and one of our closest living relatives are likely to reflect adaptations to similar dynamics in primate life histories,” Haux and colleagues write. While socialization experiences also influence human risk-taking preferences, the parallels between human and chimpanzee behavior suggest that evolutionary adaptions have helped set a consistent baseline, Haux said.

Future work should compare how the risk-taking preferences of chimpanzees living in sanctuaries may differ from those living in zoos or in the wild, as well as how they compare to those of bonobos, another close evolutionary relative of humans, she added.

“Bonobos have a different social structure, so for a complete reconstruction of our last common ancestor it would also be essential to look at bonobos,” Haux said.

Beliefs about how animals should be treated are likely socially acquired.