Observer > 2019 > May/June > Why Anthropomorphism Is Not a Scientific Sin 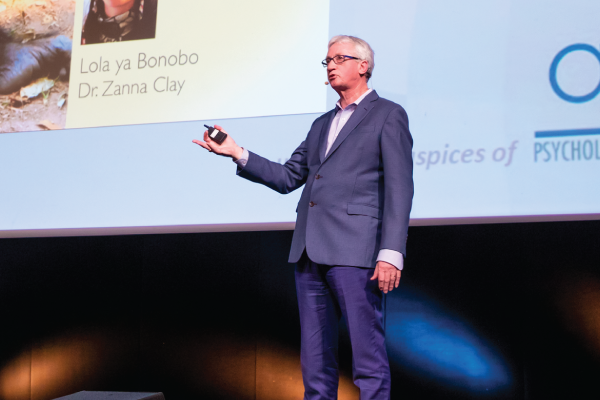 Frans B. M. de Waal Shows the Parallels in Human and Animal Emotions

APS Fellow Frans B. M. de Waal says he’s not a fan of research that relies on self-reports. That’s why he prefers to study species who can’t give them.

True emotions are manifested in behaviors and are easily measured in animals, de Waal says. In his Fred Kavli Keynote Address at the International Convention of Psychological Science, the prominent Emory University primatologist entertained the audience with a variety of videos that showed how mammals express emotions — from a baby gorilla laughing when tickled to a vole comforting a distressed mate.

“My personal view is that there are no human emotions that don’t have a parallel in animal emotions,” he said.

Anthropomorphism, the act of attributing human experiences to other species, has long been dismissed in the scientific community — a resistance that de Waal attributes to a fundamental belief in human exceptionalism. But, as he warns in his new book, Mama’s Last Hug: Animal Emotions and What They Tell Us About Ourselves, when we reject similarities between human and animal emotions we obstruct our understanding of who we are as a species. He calls this rejection “anthropodenial.”

Emotion science tends to focus on conscious awareness, or how we judge our feelings in addition to how we express them. But de Waal notes that there isn’t always a correspondence between the two — sometimes we smile when we feel nervous or cry when we feel happy. Scientists may not be able to assess animals’ feelings, but they can still learn about emotions to on the animals’ reactions, he says.

“If you study the voice, if you study all these physical body signs of emotions, you can have a perfectly objective science, without knowing much about the feelings that are associated with it,” he said.

In fact, anthropomorphism is the primary tool that de Waal and others in his field use to understand primates. He takes exception to oft-used terms like “mouth-to-mouth contact” and “vocalized panting” to describe ape behaviors, instead referring to them as “kissing” and “laughing,” respectively.  Chimpanzees will often kiss on the mouth to reconcile after fighting, or to greet each other after long periods apart.

That doesn’t mean that a chimp’s toothy grin or a gorilla’s furrowed brow signal the same emotional states that they do for us. Macaques, for example, will pull their lips away from their teeth, in a grin, to signal fear and submission, whereas in humans the same expression, the smile, has a friendlier meaning.

Of all the emotions that scientists regard as uniquely human, disgust stands out. Strangely enough, for a emotion that arose in reaction to rotten or contaminated foods, de Waal says, psychologists now declare it a product of culture more than biology. But experiments suggest that animals, like humans, will express disgust at a basic level. Chimps hate rain, for example, and in a downpour they will scrunch their noses in the same way that we usually do when we’re irritated or repulsed.

Animals have also been found to spurn foods that may be toxic or that they simply find revolting. De Waal showed an example of such research in a video. The clip shows the work of Cécile Sarabian, who studies the evolutionary origins of disgust at Kyoto University’s Primate Research Institute in Japan. In the experiment, conducted at a bonobo sanctuary in the Democratic Republic of Congo, an adult bonobo approaches a row of six banana slices in which the slice at the right sits atop some feces. The primate eats all of the slices except two — the one on top of the feces and the one adjacent to it. Sarabian and her colleagues have recorded similar behavior in chimpanzees and macaques, and they interpret the results as an indication that primates can assess possible contamination in a set of food items and make decisions on the basis of that information.

And de Waal showed examples of animals displaying basic forms of another emotion: empathy. Adult bonobos were observed rushing over to hold and comfort a screaming juvenile that had been bitten by another member of the group. Upon being held, the young bonobo immediately stops crying.

In a related experiment with prairie vole pairs, which are famously monogamous, experimenters took the female out of the cage to another room, where they gave the rodent a shock. Shortly thereafter, they return the distressed vole to its mate, who often stays close to the female and even grooms her. When the female is taken away but not shocked, the male doesn’t respond strongly to her when she is returned to the cage. Additional trials showed that females have similar reactions when the roles are reversed. Other experimenters have shown that if the voles are made immune to the effects of oxytocin (a bonding hormone), they don’t respond to their mates’ stress. It’s not clear how the voles left behind were able to sense the returning mate’s distress, but de Waal and his colleagues know that the responses do not represent a learned behavior because they tested each vole only once.

Studies have also indicated that primates can be altruistic. In one experiment, de Waal and members of his research team grouped chimpanzees into pairs — the researchers presented one partner in each pair with a bucket full of green and red tokens. That chimp learned to select one token at a time and hand it to the experimenter in exchange for treats. One color would result in a treat for both partners, while the other color would result in treats only for the chooser. The chimps making the selection overwhelmingly preferred the color that resulted in shared treats, especially if their partners waited patiently rather than making a fuss.

De Waal points to a variety of other animal behaviors that have parallels in human interactions, including elephants comforting one another by placing their trunks in each other’s mouths and dogs who yawn simply by hearing — not necessarily seeing — their owners yawn.

Researchers have even found evidence of reconciliation behavior in a variety of species, including dolphins, hyenas, and wolves. The lone exception that de Waal cited generated chuckles from the audience.

“There’s only one animal, which many of you have at home, where they have looked for reconciliation but not found it,” he said, “and that is the domestic cat.”

Observer > 2019 > May/June > Why Anthropomorphism Is Not a Scientific Sin