If you ask someone to rate their driving skills on a one to 10 scale, there’s a good chance they’ll give themselves an above-average rating like a 7. 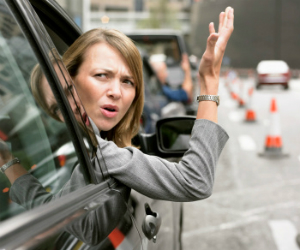 Psychological scientists Michael M. Roy of Elizabethtown College and Michael J. Liersch of New York University found that although people may rate themselves as above average, they don’t think others would quite agree. Across four experiments, Roy and Liersch found that people often believed that others would rate them as a worse driver (about 10% worse) than they rated themselves.

Because there is no standard definition for “good driving,” people tend to use their own unique, individual definitions. So, a slow and cautious driver could have a totally different definition of “good driving” than someone who likes to drive fast and aggressively.

“For a portion of drivers, their ability to text message while driving might be one of the characteristics that they believe makes them a unique and superior driver,” they wrote in the Journal of Applied Social Psychology, “or at the very least that “texting” while driving does not make them a bad driver.”

In the study, college students completed questionnaires asking them to rank specific driving skills, assess their own driving ability, and assess what driving skills were most important to them compared to others.

As predicted, across all experiments participants believed that they were exceptional drivers—but only according to their own definitions of good driving. Participants assumed that others would rank important driving skills, like checking blind spots or using turn signals, differently than they would.

In one experiment, people thought others would rank only two out of seven driving skills as the same importance as them.

The results of this study suggest that even though drivers are aware that others are using different standards for good driving, people often view their own standards as superior. This could help policymakers design more effective interventions for decreasing dangerous driving behavior.

I don’t think it’s so much the driving skills have gotten worse as much as peoples lifestyles are changing drastically. People (drivers) have too much on their minds. Day to day challenges such as jobs, taking care of their families, problems as home, fights with their spouses, boyfriends and girlfriends. People are just too preoccupied these days and don’t pay as much attention as they should.

Everything you said that happens “these days” also happened 100 years ago. What have actually changed are the roads, the cars, and the amount of traffic. I believe that these are the real reasons why drivers have gotten worse. First of all cars have gotten much better at keeping you safe in an accident so there’s a false sense of safety to a certain degree. Secondly the roads are kept in excellent condition (compared to 100 years ago) allowing us to drive at a much faster speed than before. In my experience a lot of people are very nervous to drive on a freeway because of the speed and number of cars. I’m a very confident driver but I can understand why these people feel this way. Anyways, what I’m trying to say is that everything is constantly evolving and getting better technologically and socially. Socially (the laws and unwritten rules of the road) I believe we are lagging behind and technologically we are pulling ahead. In other words, the skill of the general public at driving will not be able to keep up with the advances in technology SO technology will have to fill-in the skill gap. Thus, the creation of autonomous cars that can get you safely anywhere, at a higher speed than a human can handle, and with zero risk. That’s the future my friend. (And then you’ll have all the time you want to think about your family, girlfriend and job. Haha)

Cell phones and text were around 100 years ago?

Dane, if a person is THAT stressed out, then they need to do something about it. Otherwise, it is no one’s fault, but their own.

If you can’t take care of a family, then don’t have kids or pets. Have calm discussions with your spouse instead of yelling at them. Drop that boyfriend/girlfriend who’s only bringing you down.

People have a lot more control over their lives than they make it seem.

“peoples lifestyles are changing drastically. People (drivers) have too much on their minds. Day to day challenges such as jobs, taking care of their families, problems as home, fights with their spouses, boyfriends and girlfriends”

Which one of those things, exactly, do you think is new?

This may explain the contrasting views of drivers and pedestrians on the lanes that lack pavements in my area.
I suspect the drivers are confident (justifiably?) of their own and their cars capabilities. The drivers think nothing of driving fast and/or close to pedestrians, or braking sharply if they can’t pull-out to pass a pedestrian due to on-coming traffic. They appear to see success as “not hitting the pedestrian”.
The pedestrians are scared by the driving behaviour and believe the driving is very dangerous; and the police need to enforce better behaviour.
I think it may be similar to the expert archer hitting the apple sitting on the head of a member of the public. The archer has skills and has done this successfully many times before – the archer it is a simple no-risk act to hit the apple. However, the member of the public may be close to the point soiling their pants with fear because this may be the day the archer makes a mistake.

My grandfather used to say just because one has experience does mean it was good experience. I noticed most people who say people can not drive do cut in front of other people driving, follow to close, do not use turn singles, speed and so on lol. Just because people that drive safe unlike them does not make them bad drivers.