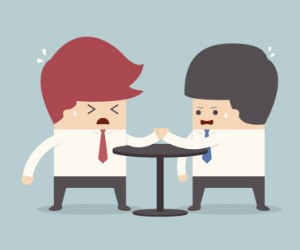 New research recently published in Psychological Science demonstrates that two hormones can exert a strong influence over a bargainer’s success in a negotiation: testosterone and the stress hormone cortisol.

Testosterone is often associated with aggressive behavior, so we might assume that the more testosterone the better when it comes to the bargaining table.

However, driving a hard bargain is about more than maximizing your earnings; negotiators also have to worry about how their economic goals might conflict with their social ones.

Being too financially aggressive in a negotiation can put a strain on the social relationship between a buyer and seller. An offer that’s too low can come across as disrespectful, unfair, or even insulting. People will sabotage a negotiation—even acting against their own financial best interests—just to retaliate against the perceived social insult of a low-ball offer.

“These results imply that there are both bright and dark sides to rising testosterone in economic social interactions that depend on fluctuations in cortisol,” Mehta and colleagues explain.

In one experiment, a group of 64 MBA students (39% women and 61% men) volunteered to take part in a short face-to-face negotiation exercise. A sample of saliva was taken before the negotiation to analyze baseline hormone levels.

The volunteers were then randomly paired with a partner and assigned to the role of either a buyer or seller for a pharmaceutical plant.

Seller-buyer pairs then negotiated over the sale of the plant for approximately 15 minutes before reporting their final agreed-on price. After the end of the negotiation participants provided a second saliva sample.

The interaction between hormones and earnings was specific to sellers in this experiment, a finding that the researchers hadn’t anticipated.

Survey results taken after the negotiation showed that hormone levels not only predicted how much a seller made, but also the quality of their rapport with their negotiation partner.

In a second study, the researchers used a controlled bargaining game to directly pit financial motives against social ones.

A group of 115 volunteers were assigned to be either a proposer or a responder. The proposer makes an initial offer on how to split a pot of $10 with the responder; the responder can then accept or reject this offer.

If the offer is accepted, the money is split as proposed. But, if the offer is rejected neither party receives any money at all. Essentially, this gives the responder the option to punish their bargaining partner for making an unfair offer.

The volunteers were told that they would play some rounds against a computer and other rounds against one of the other volunteers. In reality, all offers were predetermined. Each participant saw 12 fair offers ($5 for each player) and 18 different unfair offers.

Again, volunteers with increased testosterone and low cortisol accepted more of the unfair offers, ultimately making more money. These volunteers seemed to be focused on the bottom line, regardless of social concerns about getting an unfair deal.

On the other hand, those with increases in both testosterone and cortisol rejected more of the unfair offers. Essentially, these volunteers were more concerned about the social aspects of the negotiation—retaliating against an unfair partner even if it meant taking an economic loss.

Testosterone and cortisol may be involved in different processing systems in the brain, leading either to stimulation of areas related to reward-processing or social-threat-processing.