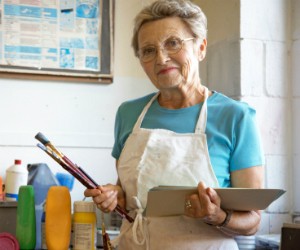 Even years after retirement, a mentally stimulating career may be keeping people’s minds active and memories sharp.

As people age, cognitive skills like memory and information processing speed tend to decline. But a large body of research suggests that this decline isn’t necessarily inevitable. As a team of experts explain in a comprehensive review published in Psychological Science in the Public Interest, “the longitudinal evidence consistently shows that engaging in intellectually stimulating activities is associated with better cognitive functioning at later points in time.”

That is, evidence seems to suggest that staying mentally stimulated, socially active, and getting adequate aerobic exercise are all “cognitive enrichment” factors that appear to protect people’s minds from the ravages of aging.

And intriguing new research from psychological scientists from Heriot-Watt University and University of Edinburgh in Scotland suggests that a mentally challenging job may be another factor that helps preserve people’s cognitive functioning.

The researchers also gathered information about the participants’ main lifetime occupation. They matched participants’ job titles to a massive occupational database compiled by analysts at the US Department of Labor.  This database included classifications of 12,000 different jobs, including complexity ratings for three different job components: data, people, and things.

After controlling for cognitive ability at age 11, years of education, and neighborhood resources, the study found that individuals who had jobs with high ratings for complexity in relation to data and people (i.e. physicists or social workers) had better cognitive performance at age 70.

The researchers argue that “these results provide support for occupational complexity as a modest predictor of cognitive performance in later life, independently of prior ability.” However, they also caution that the observed effects were small, accounting for approximately 1% to 2% of the variance in cognitive performance between people with high or low job complexity. As a comparison, this is about the same magnitude of effect as the negative association between smoking and cognitive abilities across the lifespan.

It’s not entirely clear what mechanism underlies this finding. It’s possible that a more challenging, stimulating environment acts as a sort of “cognitive reserve” that buffers the aging brain against damage. Another theory suggests that people with innately better cognitive skills tend to pursue more challenging occupations to begin with. The results of this study provide some evidence for both possibilities; although people with higher IQ scores at age 11 were more likely to land more complex jobs as adults, this early advantage did not account for all of the difference the researchers observed.

“Engaging in complex environments, such as those characterized by complex occupational demands, may help to preserve cognitive function in later life and could be one of many factors that account for individual differences in cognitive performance in older age,” the researchers conclude.