That philosophy of leadership, embraced by many ancient religions, is increasingly being adopted in the professional world as organizations adopt people-centered management practices. Servant leadership, a concept modernized in the 20th century by the writer and consultant Robert Greenleaf, involves sharing power, putting the needs of others first, and helping followers perform at their best. 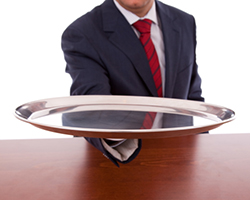 A team of behavioral scientists recently investigated the role that emotional intelligence — the ability to monitor the feelings of ourselves and others — plays in servant leadership.

Using a variety of psychological measurement tools, the researchers surveyed 75 civic leaders to measure their emotional intelligence and their perceptions of their servant leadership style.

The overall results showed that leaders with higher levels of emotional intelligence were more likely to rate themselves as valuing followers’ interests above their own, demonstrating empathy toward their subordinates, and taking responsibility for the well-being of the organization — all components of servant-leader ideology.

Those individuals, however, did not show any superior tendency to tailor their leadership techniques to each follower’s emotional traits, which is another dimension of servant leadership.

Led by John E. Barbuto, Jr., of California State University, Fullerton, the researchers also surveyed four to six subordinates of each participating leader, asking them to rate their bosses’ behaviors on several dimensions. The staffers were told their individual responses would be confidential and aggregated into results to be shared with the leaders.

Interestingly, neither the leaders’ emotional intelligence scores, nor their level of belief in servant leadership, had any relation to the subordinates’ perceptions.

“Together, our results suggest that, for the most part, emotional intelligence is a predictor of a leader’s efforts to lead with a servant-leader ideology, but not the leader’s actual servant-leader behaviors,” they write in the Journal of Leadership & Organizational Studies.

Barbuto and his colleagues caution that everyday stressors, obligations, and other factors beyond a leader’s traits or skills may affect his or her behaviors. They note, for example, that their sample involved political leaders who want to stay in office and may be more focused on their standing with the public than with their staffs. Future studies, they add, should focus on increasing the number of followers surveyed.

The overall results of the study indicate that, no matter how strongly you believe in a nurturing leadership style, your subordinates may not see that altruism manifested in your behavior.