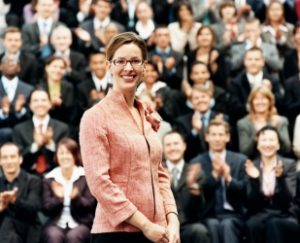 To answer this question, a team of Australian psychological scientists including Victor Sojo, Robert Wood, Sally Wood, and Melissa Wheeler evaluated whether quotas, laws, and target goals actually helped to close the gender gap in leadership on an international scale.

“The evidence indicates that women rarely get appointed or elected into top leadership positions,” Sojo and colleagues write. “By the end of 2014, on average across the world, only 10% of seats on boards of directors of public companies and 20% of seats in parliaments were occupied by women.”

To complicate matters further, when women are hired for top leadership positions it’s more likely to be during a precarious time with a high risk of failure—thus the term “the glass cliff.” A study on the glass cliff phenomenon published Psychological Science suggests that gender stereotypes affect the type of leadership positions that men and women are willing to take on.

With all of this in mind, Sojo and colleagues hypothesized that instituting reporting requirements, targets, and quotas would spur increases in the number of women hired for leadership roles.

In the first study, the researchers looked at whether reporting requirements actually increased the number of women serving on the board of directors for Fortune 500 companies in the US. In 2010, the US Securities and Exchange Commission (SEC) introduced a new requirement that publicly traded companies must disclose information about any diversity policies used in hiring board members. However, the rule does not lay out any specific quotas or penalties based on a board’s diversity.

Sojo and colleagues analyzed data from a total of 1,137 companies—all of the companies that had been listed in the Fortune 500 at some point between 1996 through 2015. Data on the number of women serving on corporate boards came from an annual census conducted by the Catalyst organization.

The results showed an observable linear trend of a steadily increasing number of female directors; after the 2010 regulations, the trend accelerated. Most companies were already increasingly hiring women, but after 2010 approximately 27% of the companies started to increase the percentage of women on their boards.

If these trends continue, the percentage of women on corporate boards is predicted to increase from around 20% in 2015 to around 26% in 2030.

In a second study, the researchers looked at whether the proportion of women on corporate boards has increased internationally as a result of different quotas and reporting requirements. Data on the percentage of female directors for 91 different countries was obtained from the Gender Map website.

As anticipated, a lack of regulatory actions was associated with a lower percentage of women on boards.

“In Study 2, reporting requirements on their own were not related to a substantial increase in female representation relative to having no regulatory action. The data about targets and quotas currently available indicate that having a goal is the key driver of higher female representation on boards of directors,” Sojo and colleagues explain.

On average, the total number of women serving on boards was around 18%. However, Norway, Iceland, Finland, and Sweden had nearly double the average rate, with women occupying around 34% of director positions. These countries all have specific quotas and targets, as well as stiff penalties for companies that fail to meet them.

“The results indicate that regulatory actions that set goals (i.e., targets and quotas) are more effective at increasing female representation on boards of directors than reporting requirements or having no demand-side strategy in place,” the researchers conclude. “Countries that have set higher targets also have higher representation of women on boards.”