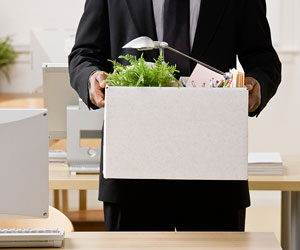 Twitter CEO Jack Dorsey recently sent 330 employees emails letting them know the company—in an effort to control costs as its user base declines—would be eliminating their jobs.  And the layoff is small in comparison to other players in the technology world. In July, Microsoft shed 7,800 positions. And Hewlett-Packard is slashing up to 30,000 jobs as part of a massive reorganization plan.

There will no doubt be thousands of highly skilled and talented professionals on the job market as the result of downsizing moves like these. But a new study appears to have identified the type of prospective employers who will view these professionals with skepticism—even though they’re unemployed through no fault of their own.

A group of researchers led by Margo J. Monteith, a psychological scientist at Purdue University, investigated whether people who are laid off are seen as having personal weaknesses that impede their ability to land new employment or draw sympathetic reactions that actually give them an advantage in the job market.

Monteith and her colleagues suspected that both sets of reactions could occur, depending on whether a job recruiter views society as just or unjust.

Psychologists refer to these world views as system justification beliefs (SJBs). Some people embrace strong SJBs, believing that people in essence get what they deserve (e.g., poor people are lazy). Others may hold weak SJBs, viewing the world as unjust (e.g., poor people are victims of unfair circumstances.)

To test how these beliefs might affect hiring preferences, Monteith and colleagues recruited 166 college students and gave them a file about a management job along with cover letters and résumés from two applicants for the position.  The participants learned that one applicant had been laid off from his previous job, while the other was unemployed due to a family relocation. They were then asked which of the two applicants they would hire, and rated the weaknesses they perceived in, and the sympathy they felt for, each of the candidates.

Next, the researchers had the students filled out a questionnaire designed to measure their system justification beliefs.

They found that the higher participants scored on the SJB scale, the more likely they were to prefer the relocated candidate over the laid-off applicant. The students who scored in the upper third of the SJB measure chose the relocated applicant nearly 62% of the time, whereas those in the lower third of the scale chose that applicant only 42% of the time.  What’s more, the high SJB scorers rated the laid off candidate as weaker and less deserving of sympathy compared to the participants who scored lower on system justification beliefs.

The researchers captured similar results in a follow-up experiment, this time presenting a separate group of participants with descriptions of two applicants—one laid off and the other relocating—for a corporate job at General Mills in Minneapolis.

Monteith and her team conclude that job seekers who have been laid off may encounter hiring biases that either hurt or favor them, depending on the extent to which recruiters’ view society as fair and outcomes just. They also warn that the SJB bias could be particularly harmful to certain groups of job seekers. Black adults, for example, are on average more than twice as likely as white individuals to be laid off, creating the potential for perpetuating racial disparities in employment settings.

The researchers call for further studies of this phenomenon in a range of real work settings, noting that SJB endorsement may vary from one profession to the next.