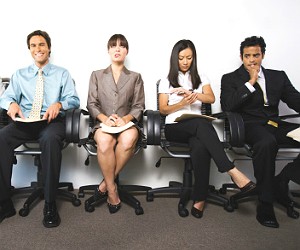 During a job interview, many applicants worry that their professional fate rests in the first few moments of the interview. After a few minutes—or even seconds—the interviewer has sized them up and arrived at a decision.

But new research suggests that there may be a different factor for job candidates to worry about: timing. Data gathered by psychological scientists Rachel Frieder (Old Dominion University), Chad Van Iddekinge (Florida State University), and Patrick Raymark (Clemson University) challenge the common belief that interviewers rely on near-instantaneous snap judgements. Instead, their research suggests that a successful interview may depend on your place in the interview schedule.

For the first one or two applicants, interviewers don’t have much information to process, allowing them to make a decision about a candidate’s suitability fairly easily. But, as more candidates are interviewed, interviewers have to remember, process, and compare increasing amounts of information. Therefore, interviewers may resort to using rule-of-thumb strategies, also known as heuristics, to help them make decisions.

To test this theory, the researchers analyzed data from hundreds of real job interviews conducted at a university career fair. A group of 166 experienced interviewers representing a variety of organizations interviewed a total of 691 students.

Each interviewer conducted an average of six interviews, each scheduled for a 30-minute time slot. Immediately after each interview session, interviewers rated the performance of the job candidate and noted at what point in the interview they had come to their decision.

According to the interviewers’ self-reports, snap judgements were actually very rare: Interviewers reported making a decision within the first minute of the interview only about 5% of the time. This generally happened when an applicant’s performance was either exceptionally good or bad.

Most of the time, interviewers reported making their decision between 5 and 15 minutes into the interview. However, over 20% still hadn’t made up their minds even after the interview was over.

The data showed that interviewers tended to take progressively longer to come to a decision after the first few applicants. However, after talking to about four applicants, the deliberation time began to decrease after each additional applicant.

In other words, as the number of applicants increased, interviewers took longer to deliberate because they had more information to process. The findings suggest that once the cognitive load of all the information got to be too much, around the fourth candidate, they began to rely more on heuristics to come to a quicker, more automatic decision.

Other factors also influenced how quickly an interviewer came to a decision. Interviewers who engaged in small talk with applicants tended to make quicker decisions, as did interviewers with more experience.

The researchers caution that they were not able to determine whether interviewers who took longer to make a decision were actually better at choosing high-performing applicants. It’s entirely possible that quick judgements were just as accurate at gauging talent as more deliberate interviews.

However, organizations may benefit from making sure that interviewers give each candidate an equal shot to show their stuff during the interview. The researchers suggest limiting the number of interviews that an interviewer conducts in immediate succession and ensuring there are breaks between interviews.