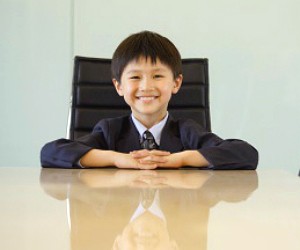 New research concludes that the foundations of leadership may be laid early in life, suggesting that our cognitive abilities as children strongly influence our odds of moving up the corporate ladder as adults.

Analyzing data from almost 17,000 working individuals in the UK collected in two major studies over a span of 4 decades, psychological scientists Michael Daly, Mark Egan, and Fionnuala O’Reilly of Stirling University found that high scores for cognitive abilities at age 10 dramatically improved the odds of becoming the boss by age 50.

“The results suggest that early individual differences in childhood general cognitive ability may profoundly shape trajectories of leadership across working life,” the researchers write in the journal Leadership Quarterly.

At age 10 or 11, children in the study completed measures of their verbal skills, reasoning, and general cognitive abilities. Beginning in their 20s, the participants were asked every 10 years or so whether they managed others at work and, if so, whether they supervised more or less than 25 people.

As expected, children with high scores for cognitive abilities were more likely to occupy leadership positions as adults. For the cohort of children born in 1970, around 37% of those with high scores occupied leadership positions compared to 25.4% of low cognitive ability children. This gap was even more pronounced (27.8% vs. 15.1%) in participants from the cohort born in 1958.

“It appears that the predisposition towards effective reasoning and problem solving in childhood continues into adulthood and acts to foster leadership potential including the ability to supervise and manage large numbers of subordinates,” Daly and colleagues write.

And the researchers found that the relationship between cognitive ability and leadership was partly explained by participants’ educational attainment — the higher their cognitive ability was at 10 years old, the more likely participants were to complete an advanced degree. Higher education, in turn, was associated with holding management positions in the workplace.

“The greater attainment and skill development associated with high levels of education appeared to be recognized by employers and partially explained why such children went on to leadership roles,” Daly and colleagues write.

However, the researchers found a substantial “leadership gap” that emerged between men and women. Women occupied management positions at much lower rates than men, regardless of their cognitive abilities; by age 50, only around 30% of women were managers, compared to around 50% of men.

It may seem obvious that smart kids turn into smart adults who are better equipped to take on management roles, but previous studies have found little association between general cognitive ability and leadership occupancy.

This study was unique in tracking a huge number of participants over four decades. Prior research has been unable to follow participants for such extended periods of time, which may explain why the link between childhood cognitive ability and leadership potential has not previously been identified.

“It is perhaps unsurprising that those with high levels of cognitive ability appear to thrive and go on to occupy leadership positions in the cognitively demanding environments that characterize modern organizations,” the researchers conclude.

News > Minds at Work > Can Leadership Potential be Predicted at Age 10?

It does seem logical. On the other hand one shouldn’t equate managing others with leading them. Being in a leadership position doesn’t necessarily make one a leader.

I just recently studied different influences and outcomes of various tests, but I am pleased to see that researchers are still discovering new ways of identifying certain traits in individuals at such young ages. While I don’t agree with all testing, I definitely feel that discovering an aptitude at a young age aids in honing said aptitudes as ones progresses.

My book, Gettysburg Lessons in the Digital Age, proves that leadership is in your DNA. We are all BORN leaders.

I was initially thinking of this issue to be the leading question to my PhD. Now after I’ve seen the outcomes of this research, which precisely answers my question, I feel I need to look for another topic for a PhD. Great research and good job!