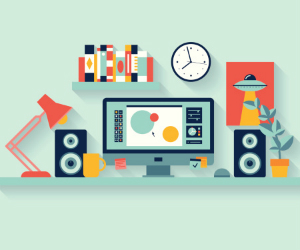 Several studies have found that open office layouts can negatively impact employee performance. Environmental noise and interruptions can become distracting, impairing workers’ productivity. Employees in open offices have also been found to have higher levels of stress, lower levels of concentration and motivation, and they even seem to take more sick leave.

In another strike against open offices, a recent study finds that employees who lack privacy may suffer from higher levels of emotional exhaustion compared to those who have an office with four opaque walls and a door.

Psychological scientists Gregory A. Laurence, Yitzhak Fried, and Linda H. Slowik hypothesized that when employees lack privacy they end up spending more energy and mental resources on coping with distractions, including the stress of feeling as though they are under observation by colleagues and supervisors.

“When people experience their work environment to be low on privacy, it enhances the pressure on them to divide their mental attention between pursuing work assignments and handling the distractions, interferences, and feelings of being monitored that are associated with low experience of privacy,” Laurence and colleagues write in the Journal of Environmental Psychology.

The researchers suspected that open-office workers might be able to maintain a sense of control over their space by personalizing it. Bringing in personal items such as photos, knick-knacks, and children’s drawings may provide workers with a greater sense of ownership and control over their space, which could help to buffer against the negative effects of a lack of privacy.

“Creating a place of one’s own in an otherwise public workspace environment should further contribute to individuals’ positive cognitive and affective states, resulting in enhanced mental resources, enabling better coping with the potentially debilitating interferences associated with low privacy,” the researchers write.

For the study, the researchers recruited 87 employees working in administrative or clerical positions in a university’s administration building. About half of the participants had a traditional office (with four opaque walls and a door) while the other half worked in office set-ups with varying amounts of privacy (some walls or partitions of varying heights). The participants completed assessments measuring their perceptions of privacy and levels of emotional exhaustion.

Each participant’s office was then coded for privacy (whether they had four opaque walls and a door, how many enclosed walls or partitions, and how high the enclosures were), and the total number of personal items in each office (photographs, posters, pieces of art, children’s artwork, comic strips, mugs, and other items) were counted.

Because workers tend to attain greater degree of office privacy with seniority, the researchers controlled for factors such as rank within the organization and age. They also controlled for gender, since women tend to decorate their work space more than men.

Laurence and colleagues caution that their findings are limited by the small sample size and the fact that the entire sample came from just one office. If they are replicated, however, the findings suggest that both employer and employee can benefit when workers are allowed to personalize their workspaces, especially in open-office settings.

“Individuals may consciously or subconsciously take comfort from the items with which they surround themselves at work, and these items may help employees to maintain emotional energy in the face of the stresses that come from their work and the distractions and difficulties inherent in working in a low privacy environment (noise, interruptions, being observed by others, etc.),” the researchers conclude.