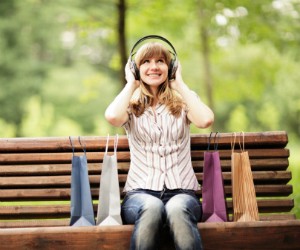 Background music has a surprisingly strong influence on what products consumers buy and how much they’re willing to pay for them, according to a new study from psychological scientists Adrian North and Lorraine Sheridan of Curtin University and Charles Areni of Macquarie University.

North and colleagues hypothesized that specific songs or musical genres could prime congruent concepts in a person’s memory, ultimately shifting people’s preferences and buying behavior. Hearing Edith Piaf in the grocery store may then be just the thing to nudge a buyer to choose a French wine over an Italian or South African one.

“Playing German music might make consumers think of beer and bratwurst, whereas French music might evoke images of wine and the Eiffel Tower,” the researchers explain.

In one experiment, 120 Scottish college students were assigned to one of four rooms in a lab. Each of the four rooms featured one of three types of music—American (The Beach Boys), Chinese (The Peking Brothers), Indian (Sunidhi Chauhan)—on a continuous loop. The fourth room had no music. Participants were then given a menu featuring 30 different entrees representative of the cuisine of China, India, and the United States (e.g. hamburger, dim sum, chicken tikka masala).

After perusing the menu for a few minutes, the students were asked to recall and list as many of the menu items as they could before choosing one item to hypothetically order.

A second experiment looked at how different styles of music could influence the perceived cash value of an item.

“Several studies have indicated that the upmarket stereotype of classical music is associated with customers being prepared to pay more for the same products than when other musical styles or no music are played,” writes North and colleagues.

Because of the so-called “upmarket” connotations of classical music, the researchers expected that classical music would lead people to pay more for “social identity” products affiliated with sophistication and a high-rolling lifestyle (i.e. cologne, gold stud earrings). They hypothesized that country music, in contrast, would lead to participants to pay more for utilitarian products (i.e. toothbrush, disposable ball point pen).

Groups of 180 Scottish college students heard either classical music, country music, or no music while viewing slides of 10 social identity products and also 10 utilitarian products. After each slide, participants wrote down the top price they would be willing to pay for each of the 20 products.

“Music incongruent with product image can lead to a reduction in the maximum prices consumers are prepared to pay,” the researchers write in the Journal of Retailing.

A final study revealed that participants who were first primed with luxury images (e.g., royal palaces, race horses) while listening to classical music were willing to pay more for social identity products than non-primed participants.

Moreover, this effect was particularly strong when students were under time pressure to make pricing decisions. After being primed, students who only had 5 seconds to decide were willing to pay more than students who had a whole minute to decide on a price. This suggests that in real world conditions, consumers are more susceptible to these subtle cues when they’re more mentally overloaded.

While background music may not convince buyers to abandon their typical preferences, this study suggests that a little attention to detail when selecting music could help retailers make a few more sales.

“A retailer with a narrow mix of wines from France might play stereotypically French music, which would elicit congruent concepts in the minds of shoppers and, potentially generate incremental sales relative to playing irrelevant or incongruent music,” the researchers conclude.

Interesting studies. What were the statistical significance figures please and are there any studies with a larger sample size?

Loved it. Thank you