News > Minds at Work > Aha! Close Your Eyes for Inspiration

Aha! Sometimes the solution to a tough problem comes suddenly, in a burst of insight. You may have been painstakingly hashing through the details for a new business plan for days, when suddenly a brilliant, creative solution strikes as you’re taking a shower or staring out the window. 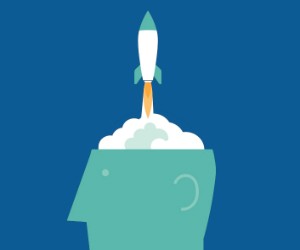 New research from an international team of psychological scientists suggests a link between our “Aha! moments” and what we’re looking at. A study led by Carola Salvi of Milano-Bicocca University concluded that inspiration may be more likely to strike when we close or eyes or simply stare into space.

“Creative ideas seem often to appear when we close our eyes, stare at a blank wall, or gaze out of a window—all signs of shutting out distractions and turning attention inward,” the researchers write in Psychonomic Bulletin & Review.

Previous research from APS fellows John Kounios and Mark Beeman has demonstrated that solving problems analytically activates different attention-related brain areas relative to when people solve problems through a stroke of sudden insight. While some problems are solved through conscious, deliberate analysis, other times a solution seems to materialize in our heads out of nowhere.

“Although the experience of insight is sudden and can seem disconnected from the immediately preceding thought, these studies show that insight is the culmination of a series of brain states and processes operating at different time scales,” Kounios and Beeman write in Current Directions in Psychological Science.

In a new study, Salvi, Kounios, Beeman, and co-authors tested the hypothesis that decreasing visual attention—that is, closing your eyes—is associated with sudden insight when solving a problem. To test this, they measured people’s visual attention as they attempted to solve a series of word problems using eye tracking technology.

“People blink less frequently when visual attention is strongly engaged, and more frequently as their internal cognitive workload increases,” writes Salvi and colleagues. “People also tend to avert their gazes from distracting stimuli when they perform internal processing, such as searching through long-term memory.”

The researchers predicted that solving a problem analytically would result in greater attentional focus on external stimuli, generating fewer blinks and more eye fixations. On the other hand, as people’s focus shifts internally during an insight solution, you would expect to see the opposite: more blinking and fewer eye fixations.

For the study, 38 college students came into the lab where they wore an eye-tracking apparatus as they completed challenging word problems. Eye movements were recorded throughout the whole experiment.

For each of the word problems, three words (e.g., crab, pine, sauce) were simultaneously presented on a screen. The participant had to come up with a single word (e.g., apple) that could form a common compound word or phrase with each of the three problem words (i.e., crab apple, pineapple, apple sauce). Following each solution, they reported whether they used insight or analysis to get to their answer.

Overall, participants were able to correctly solve about 42% of the 120 word problems. Of these, they reported that about 60% were solved using insight.

Results of the eye-tracking data showed that participants blinked more frequently and for a longer total duration prior to problems that they solved by insight rather than by analysis. Participants also moved their eyes less frequently before problems that were solved through insight.

“In the present study, higher eye blink rates in the preparation period were associated with increased insight solving. We speculate that this relationship could be related to phasic increases in dopamine function,” the researchers explain.

“Although the present data are correlational, and cannot definitively show a causal relationship between patterns of attention and the type of solution, the fact that our blink and fixation measures differed before problems were presented (when the subsequent problem difficulty could not have had an effect) strongly suggests that starting (and unfolding) attention states were driving these differences,” Salvi and colleagues conclude.

News > Minds at Work > Aha! Close Your Eyes for Inspiration

Interesting stuff. Compare and contrast with the finding that breadth of attention as a trait has been found to result in more creative performance.

A cautionary note always worth bearing in mind in this area is that a lot of creative outputs generally take longer to work on then simple tasks, and will involve different stages, perhaps with the incorporation of “simpler” or “more complex” cognitive processes differing over the course of the creative process.