News > Full Frontal Psychology > Looking For Trouble (And Seeing It) 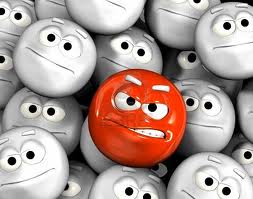 I’ve known a few troublemakers over the years. These were guys with huge chips on both shoulders, who would gladly pick a fight if you looked at them wrong. And looking at them wrong could really mean doing nothing provocative at all, because they saw signs of hostility and threat where others did not, especially in others’ faces. They were literally looking for trouble.

Scientists and clinicians are interested in the dynamic interaction of perception and aggression. Looking for trouble, and seeing it, may be a deep cognitive bias—a negativity bias—that distorts normal emotional processing. Indeed, some experts wonder: Does seeing anger and hostility in others actually elicit angry feelings and aggression, creating a vicious, self-fulfilling, cycle? In other words, do some people act mean simply because they see the world as a mean place?

A team of psychological scientists in the UK decided to find out. Led by Marcus Munafo of the University of Bristol, the investigators ran a series of experiments to verify if such a negativity bias does in fact lead to aggressive behavior and, further, to see if such distorted emotional processing might be corrected. They did this by having a group of healthy adults look at, and react to, pictures of morphed faces. Think of your own facial expressions. Some are clearly happy, others unambiguously angry. But these are extremes and most are somewhere in between—with some being very difficult to read at all. The volunteers looked at a lot of these ambiguous, difficult to interpret faces, and were forced to label them happy or angry.

This determined each volunteer’s baseline level of negativity bias—how likely they were to see anger in ambiguous faces. Then the scientists trained some, but only some, of the volunteers—using feedback to nudge them away from this negativity bias. When they labeled a neutral face as angry, the feedback indicated that this was not correct—that it was in fact a happy face. Over many trails with many different faces, these volunteers learned to see happiness in some of the ambiguous faces that they previously identified as angry.

Or at least that’s the theory behind the intervention. To check, the scientists retested all the volunteers, using similar morphed faces. The results were intriguing. Those who underwent training showed a clear shift, compared to controls, in perception of anger. They were more likely to label ambiguous faces as happy rather than angry. What’s more, these trained volunteers were themselves less angry and aggressive, as measured by an emotional inventory. In other words, it appears that the intervention did modify the volunteers’ negativity bias, which could lead to beneficial changes in behavior.

The volunteers in this first study were healthy adults, like you and me, with no history of aggression or violence. How would such an intervention work with people known for their anger and belligerence? Munafo and his colleagues decided to test the training on a group of teenagers who were already at high risk for adult criminality. The volunteers had all been referred to a youth program for delinquent teens, either by the courts or schools, and many already had records of aggression and criminal offenses.

The training was basically the same as before, except that it lasted longer—four sessions over a week’s time. The teenagers also kept a diary over this time, noting every incident of anger and aggression, from verbal abuse to physical assault. Staff members at the youth program also rated each of the volunteer’s behavior, to corroborate the teenagers’ self-reports. These diary entries and staff observations continued through the final reevaluation two weeks later.

The results were very encouraging. Those who received the bias modification training shifted their perceptions, seeing less anger in ambiguous faces. In addition, these teenagers were much less aggressive—based on both self-reports and staff assessments—when they were assessed two weeks later. Two weeks is not a long time, but these findings do raise the hope that these training effects will persist, even with adolescents at high risk for conduct disorder and lives of crime.

Both of these experiments relied of explicit feedback to change the way volunteers judge others’ emotions. The scientists wonder if it might be possible to get the same result with another approach, specifically by making volunteers adapt visually to angry faces. It’s known that prolonged viewing of any image alters the perception of related images afterward, so the scientists forced some volunteers—healthy adults again—to focus on angry faces only, while controls looked at a mix of emotional faces.

The results were essentially the same. As reported in a forthcoming issue of the journal Psychological Science, those who were forced to adapt to angry faces subsequently shifted their emotional perception, seeing more happiness in ambiguous faces. And once again, they themselves were less angry and aggressive.

So did the training break the vicious cycle of perceived anger and aggression? Did it create a “virtuous cycle,” boosting perceived happiness and diminishing aggression? It’s not certain, but that’s how the scientists would like to interpret the results, and they see an intriguing parallel in the working of antidepressant drugs. It’s been proposed that medication leads to rapid changes in emotion processing biases, which in turn allows cognitive changes that improve mood. That is, improvement in mood results from changes in emotion perception, not the other way around. These new findings suggest a similar mechanism at work with aggression. If so, these results might point to a simple, fast and cost-effective way to keep the troubled from looking for trouble.

Wray Herbert’s book, On Second Thought, is about cognitive biases and irrational decision making. Excerpts from his two blogs—“Full Frontal Psychology” and “We’re Only Human”—appear regularly in The Huffington Post and in Scientific American Mind.

News > Full Frontal Psychology > Looking For Trouble (And Seeing It)