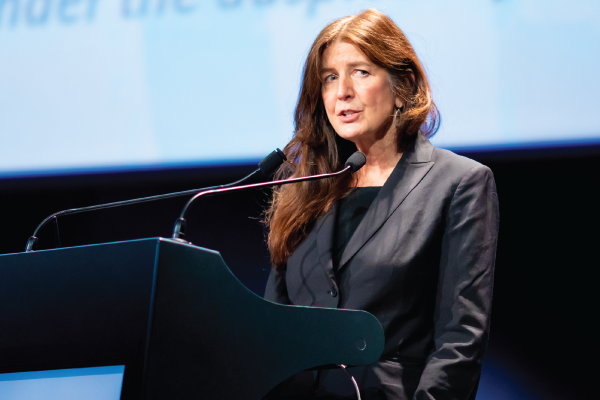 BJ Casey on Self-Control in the Adolescent Brain

The teenage brain has been likened to a defective vehicle: all accelerator, no brakes or steering. In a car, this is a recipe for a disastrous ride, and some data suggest that adolescence is a dangerous time: Adolescents are more likely to engage in risky behaviors and suffer from mental illness compared with people in other age groups. But some developmental psychological scientists argue that the rash decisions, impulsive behavior, and susceptibility to peer pressure that mark this period are an important developmental feature, not a bug.

In her Fred Kavli Keynote Address at the International Convention of Psychological Science in Paris, APS Fellow BJ Casey, a professor of psychology at Yale University, discussed why the seemingly deviant behaviors of adolescence are actually an intrinsic part of brain maturation.

Casey defines adolescence as the period during which a person transitions from dependence on the caregiver to relative independence, with an onset that typically coincides with puberty. It is characterized by heightened sensitivity to the rewards, threats, and social influences that affect self-control — the ability to engage in adaptive emotions, desires, and actions and suppress inappropriate ones.

“Adolescence is this extended period of development where there’s a heightened sensitivity to social situations and information. We think that this sensitivity is actually helping to enhance their ability to learn about the social information, because that is going to be key as they take on adult roles in the larger society,” Casey said.

To measure self-control, Casey often uses a go/no-go task, in which subjects view a series of images and are instructed to perform an action in response to some of the images (e.g., pressing a button to whack a pesky mole when it appears in an on-screen garden) but to inhibit that action when they see other items (e.g., refrain from pressing the whacking button when an innocent vegetable appears). Their accuracy is a reflection of their level of impulsivity: Committing more errors indicates a more impulsive pattern of responses, or less self-control.

Accuracy on this basic task tends to increase with age until the early teen years, at which point it remains relatively stable into adulthood. However, when 13- to 17-year-olds are presented with social and emotional images (e.g., smiling or fearful faces) during this task, they make more impulsive errors than they do when they are presented with neutral images — a pattern not observed in children and adults.

Many studies of adolescents use an age cutoff of under 18 years, but Casey has been designing studies to examine exactly when self-control reaches maturity in social and emotional contexts. To identify when an adolescent actually becomes an adult, Casey homed in on the ages of 18 to 21, a developmental period during which some adult rights are conferred (e.g., voting) while others are not (in the US, the ability to buy and consume alcohol).

Using a go/no-go task, Casey looked at subjects’ accuracy under positive arousal and threat conditions. She presented subjects with brief cues of positive arousal, such as a smiling face, or negative arousal, such as an alarmed face. Subjects also performed this task under sustained positive (possibility of receiving $100) and negative (possibility of hearing a loud aversive noise) conditions. Under both negative arousal conditions, 18- to 21-year-olds performed similarly to younger adolescents — and differed from adults. Brain imaging data showed that the limbic systems of adolescents and 18- to 21-year-olds were more active during these conditions relative to adults, who showed relatively greater activation in prefrontal control regions associated with decision making.

“These findings suggest that at younger ages, the task is still more emotional, and at the older ages, it’s treated more as a cognitive task,” Casey explained.

These findings indicate that socioemotional control processes develop later relative to cognitive capacity, meaning that even when adolescents have the cognitive ability to exercise self-control, the social and emotional context of a situation still greatly modulates this ability. This pattern of findings has been shown cross-culturally, implying that this is not a US-specific phenomenon, and the results also align with neurobiological changes in the developing brain.

“This lag in development, or perhaps hierarchical changes in these abilities, actually map onto neurobiological models of the adolescent brain, suggesting that in these deep emotional centers related to desire and fear and rage, the circuitry within them is changing before circuitry between them and among them is fully developed,” Casey said. These circuits build upon each other throughout the teen years and into the 20s, informed by the rich emotional experiences of adolescence.

Taking inspiration from the seminal work of her friend and collaborator APS Past President Walter Mischel, Casey has delved into exploring how self-control varies across individuals and across development.

In one study, she followed up with a subset of subjects from one of Mischel’s famous marshmallow test experiments, in which young children were given the option to have a single marshmallow at that moment or to wait and receive two marshmallows later. Forty years after the original experiments, Casey had subjects who had been well below or well above the average delay score complete impulse-control tasks that included neutral and positive cues (a neutral or smiling face). Casey found that low delayers were less accurate in response to positive social cues than were high delayers. However, the two groups showed no differences in the neutral condition. Brain-imaging data collected during the task revealed a relative increase in reward-circuitry activity in response to positive social cues among low delayers compared with high delayers, hinting at a possible mechanism behind self-control.

“Differences in self-control, as indexed by delay of gratification, do not reflect general impulsivity, but rather impulsivity specific to cues of value — a marshmallow or a smiling, accepting face,” she explained.

Casey and her collaborators are increasingly interested in accounting for the social factors associated with individual differences in self-control. A recent reappraisal of findings from some of the original marshmallow test studies, for example, found that the link between children’s ability to delay gratification and their life outcomes is weakened when external factors such as family background, early cognitive ability, and home environment are accounted for.

And research suggests that one of the most salient socioenvironmental factors may be a person’s race. Building on persistent negative stereotypes of black men as threatening and evidence that individuals tend to act more impulsively under conditions of threat, Casey and colleagues assessed subjects’ impulsivity in response to black and white faces. Compared with neutral and positive conditions, both black and white participants in the threat condition responded more impulsively to black faces than to white ones, committing more false-alarm errors under the sustained threat condition.

“Social factors are important for us to consider when we’re thinking about trying to enhance self-control, and also for policies trying to enable and provide opportunities for young people to learn self-control,” Casey said.

Several longitudinal studies with large samples are now under way around the world, with the aim of examining the neurological and psychological development of children and young adults. These studies have the potential to enhance our understanding of these important developmental periods, but they must reckon with social factors, Casey said.

Some Cognitive Skills Are Easier to Train Later

Teens’ Memory for Faces Shifts Toward Peers During Puberty