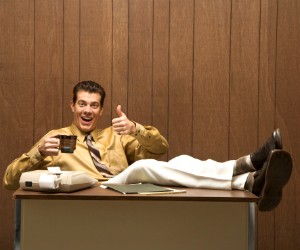 Infamously disagreeable innovators ranging from Thomas Edison to Steve Jobs have helped to propagate the idea that being headstrong and aggressive may be linked with creative genius. After all, creative success isn’t just about coming up with an innovative idea — you also have to convince others to get behind your idea, and this is where researchers find that being a jerk may come in handy.

But new research shows that you don’t have to be a jerk to come up with the next game-changing creative idea. Psychological scientists Samuel Hunter of Pennsylvania State University and Lily Cushenbery of Stony Brook University warn that while being aggressive may have benefits in some contexts, it’s not a guaranteed strategy for promoting creativity.

Hunter and Cushenbery note that novel ideas are often met with greater skepticism and criticism than conventional ones. But, because disagreeable folks are willing to argue and fight for their own ideas in the face of criticism, they may end up being more successful in actually getting their ideas implemented.

After assessing the individual and group plans for originality, the researchers found that there wasn’t a relationship between agreeableness and innovative thinking; however, less agreeable folks were more likely to have their own ideas included in the final group project compared to their more agreeable peers.

But a second experiment demonstrated that being disagreeable is only helpful for promoting creative ideas in certain social contexts. The researchers hypothesized that being a jerk would come in handy when working with critical, unsupportive colleagues but would hamper the originality of shared ideas when working in a supportive, creative environment.

In the second experiment, 291 college students were asked to write down their ideas for a novel gift for graduating seniors at their university. They were then asked to share their ideas in a chatroom with two other anonymous students.

After completing the initial task, students were asked to come up with more original ideas—this time for designing furniture for the dorm room of the future—to be shared in the chatroom.

As expected, the results revealed that generally disagreeable participants (as determined by the personality trait measures) were able to generate more original ideas for the dorm furniture in the face of critical feedback from the confederates.

However, when the confederates were supportive and creative themselves, disagreeable participants came up with less creative proposals.

“Although disagreeability appears to be generally unrelated to who has original ideas (e.g., idea generation) such qualities may indeed help with the inherent biases of getting an original ideas heard and used by others,” the researchers write in the Journal of Business Psychology.

While many people think of innovation as coming up with novel ideas, this research demonstrates that social factors play an important role in cultivating creativity in group and organizational settings.