The New York Times: The vast majority of interactions between police officers and civilians end routinely, with no one injured, no one aggrieved and no one making the headlines. But when force is used, a new study has found, the race of the person being stopped by officers is significant. More 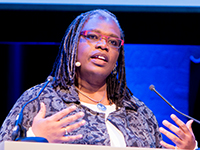 The Brain Likes Categories. Where Should It Put Mixed-Race People?

NPR: Humans like to place things in categories and can struggle when things can’t easily be categorized. That also applies to people, a study finds, and the brain’s visual biases may play a role in perceptions of mixed-race people. The study, published in Psychological Science on Monday, asked people to More

Where We Live Affects Our Bias Against Mixed-Race Individuals