How to completely, utterly destroy an employee’s work life

The Washington Post: Recall your worst day at work, when events of the day left you frustrated, unmotivated by the job, and brimming with disdain for your boss and your organization. That day is probably unforgettable. But do you know exactly how your boss was able to make it so More

The Daily Mail: Dieticians often warn of the dangers of over-indulging on calorific snacks and buying too much if we risk going food shopping while hungry. And it appears they may have a valid point after new research has discovered that how hungry we are directly effects how we view More

Hunger Affects What We See

Scientific American: Hunger is the best sauce. And it affects perceptions of anything related to food. Even words. Researchers tested two groups. One group just had lunch. The other hadn’t eaten in four hours. The subjects watched computer screens as 80 words flashed by, each for about 1/300th of a More

When My Eyes Serve My Stomach

Our senses aren’t just delivering a strict view of what’s going on in the world; they’re affected by what’s going on in our heads. A new study finds that hungry people see food-related words more clearly than people who’ve just eaten. The study, published in Psychological Science, a journal of More 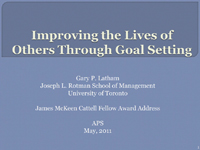 APS Fellow Gary Latham had many goals when he left graduate school, but returning to academia was not one of them. “I made the decision that I did not want to be an academic,” said Latham in his 2011 James McKeen Catell Fellow Award Address. “At the time, I wanted More

Updating the Psychology of Self-Control

The Wall Street Journal: An influential theory of self-control holds that willpower is like a muscle — it is depleted through exertion, and it can be replenished by ingesting simple carbohydrates. There’s a book out now that explains this so-called “energy model” of willpower, at length — co-written by Roy More