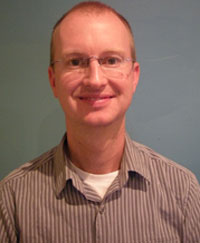 I am a social psychologist interested in the causes and consequences of anger and aggression. The work in my laboratory takes a wide-ranging approach to understanding these phenomena in that we investigate psychological and biological variables and their interactions. Specific foci include understanding the role of self-control in aggression as well as trying to identify how individuals can best regulate their anger. Two additional research interests include prejudice and social stress. So, the sunny side of life really

I am intrigued by why people hurt each other. I am not convinced perpetrators always understand why they aggress. All you have to do is glance at the headlines to see that the problem has not yet been solved. The sheer magnitude and universality of anger and aggression keeps me motivated. Being male and growing up on a diet of Arnold Schwarzenegger movies probably helped too.

I live in Australia, but grew up in Southern California. I got my B.A. from the University of California, Santa Barbara. I took Brenda Major’s social psychology class during my last quarter at UCSB, which inspired me to continue on. I did not get into graduate school right away due to some pretty miserable GRE scores, but Brenda’s letter got me into a Research Psychology M.A. program at California State, Long Beach, where Jim Amirkhan — a great guy — kindly supervised my thesis. When I finally did get into graduate school at the University of Southern California, I was fortunate to have two PhD supervisors: Norman Miller and Brian Lickel. Being supervised by both junior and senior people was the best of both worlds. From Norman, I learned methodological rigorousness, emphasis on behavior, and passion for science. Brian was extremely generous with his time and knowledge, and he set an amazing example of hard work. I also learned a lot about public speaking from him. For example, he suffered through my job talk no less than four times and provided exceptionally detailed and helpful feedback each time. I also learned that getting tenure at a major American research university seems like it can be pretty stressful.

All of the people mentioned above, my supportive wife, dedicated students, and funding from the Australian Research Council and the Australian National Health and Medical Research Council. Moreover, so many people have helped me over the years. After getting my PhD in 2007, I moved to the University of New South Wales. There is a great group of people here who have generously mentored me. I have also been fortunate to work with a number of excellent collaborators in Australia, Europe, America, and Asia. I am also indebted to the very helpful aggression researchers I have met at conferences over the past few years. Current and former presidents of the International Society for Research on Aggression, Craig Anderson and Deborah Richardson, have been exceptional in encouraging junior people like myself. Mario Mikulincer and Phil Shaver invited me out to Israel in 2009 for their Herzliya series on social psychology, for which I am most grateful. Ironic as it may sound, aggression researchers are actually very nice.

We recently started a new project investigating aggressive driving with a state-of-the-art driving simulator that I am pretty excited about. We have been doing some alcohol and aggression stuff that I am really enjoying. I also think there is a lot more work to be done on understanding self-control processes in aggression and anger regulation. We also plan to investigate hormonal influences on anger control, aggression, and neural activation, as there have been some pretty interesting developments in the area recently.

At the risk of sounding like a motivational poster you might find adorning the lobby at a major corporation, perseverance in the absence of positive reinforcement is an important skill to develop. I took the long road to a PhD, ran many failed experiments in graduate school, and got some really nasty decision letters (which I sometimes use in my talks when I need an example of a provocation). I also think enjoying your work is extremely important. Being a social psychologist is a lot of fun, but sometimes we tend to forget that.

In this paper, we induced anger with a realistic provocation and subsequently induced rumination. This study was my first fMRI paper as lead author. It was very challenging but I enjoyed the entire process. The data came out beautifully and the results have really influenced my thinking regarding the role of control mechanisms in anger regulation and aggression. I really felt like we had discovered something interesting that could eventually be beneficial to perpetrators of aggression and their potential victims.