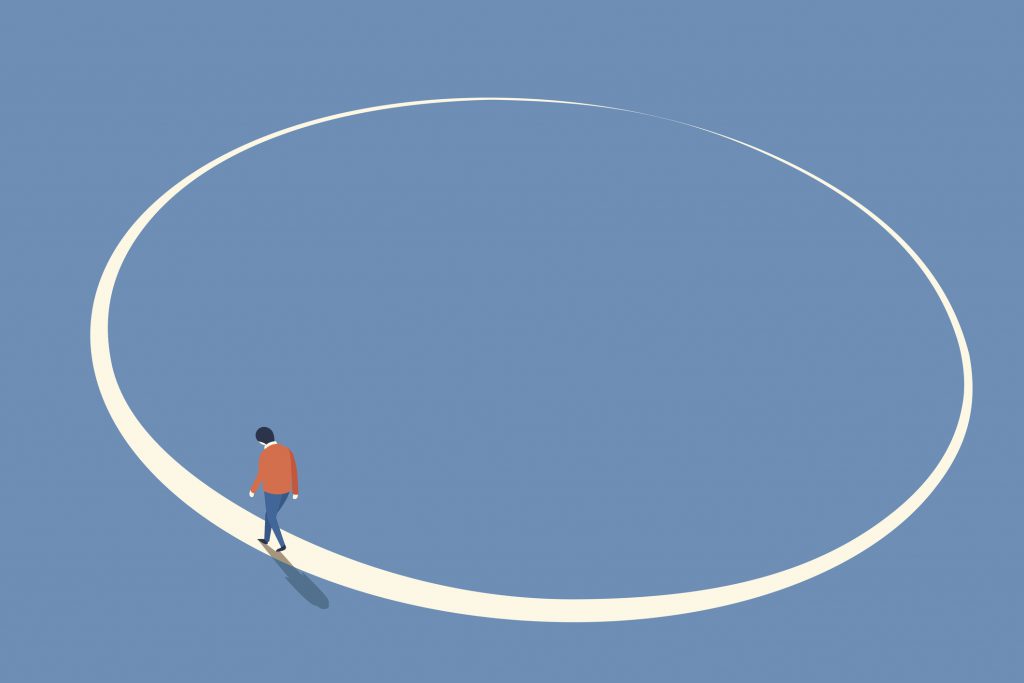 Why do people who have lost dozens of pounds struggle to maintain their weight once those pounds are gone? How is keeping afloat in the job you have different from working to get a promotion or trying to ace a job interview? Could running to stay healthy be tougher than running your first marathon?

Keeping things the same is a very distinct process from striving for a goal. Researchers Yael Ecker and Michael Gilead from the University of the Negev describe the differences in Perspectives on Psychological Science, highlighting research on goals and motivation that sheds light on maintenance as a distinct process.

In a 2007 study led by researchers at Duke University, college student participants saw words on a screen as their brain activity was recorded by an fMRI machine. The data showed that words related to goals the student had and words related to subjects they wanted to avoid were associated with activity in distinct areas of the brain, activity that differed from the responses participants showed to neutral words. This suggests certain brain circuits are involved in striving for something you don’t have and avoiding unpleasantness – but researchers have yet to discover equivalent systems that are principally involved with maintaining the status quo. This could mean that the biological basis for maintenance behavior is a bigger challenge than seeking pleasure or avoiding pain, write Ecker and Gilead.

There also may be challenges to prioritizing maintenance goals. Research has shown that people prioritize their goals according to the difference between their current state and their desired end state. When the goal is to maintain our current condition, those two states are very close, by definition. With limited time and nearly infinite possible goals, we may prioritize goals that seem more distant.

Additionally, as Ecker and Gilead point out, maintenance isn’t much fun. Engaging in repetitive behavior to keep things the same can be monotonous, whereas seeing new results is motivating. Humans really don’t like being bored. In a 2014 study, psychological scientist Timothy Wilson and colleagues found that student participants would rather give themselves a painful electric shock than sit quietly in an empty room.

Given these challenges, the authors suggest a number of strategies may help people in achieving their maintenance goals. These strategies have not been well-researched as yet, but Ecker and Gilead believe they are good candidates for investigation.

First, they suggest that thinking of the maintenance goal in small pieces might help:

“For instance, if John’s goal is to maintain his current job, he can reframe it as a progress goal by focusing on more specific details, such as ‘finish this urgent report by Monday.’ By choosing a more concrete subgoal and focusing on it, John gains a progress goal that can better energize goal pursuit.”

Alternately, the maintenance goal could be imagined as part of a larger goal. “John can look at the bigger picture and realize that the higher order goal in maintaining his job is to buy a house and raise a family, and because this goal object has yet to be attained, he can now progress toward it,” Ecker and Gilead write.

Although it might seem boring, repetition has its benefits. According to the researchers, “strategically automating” behaviors can turn them into good habits. In a 2015 Perspectives on Psychological Science article on maintaining healthy habits, APS Fellow Alexander Rothman of the University of Minnesota and colleagues suggest linking new behaviors to already established ones, on both an individual and a policy level. For example, public information campaigns could link the safety behavior of changing smoke alarm batteries with something people already do twice a year: changing their clocks for daylight saving time. On a personal level, one could link a health practice, such as taking medications, with a daily habit, such as eating dinner. The researchers point to a 2015 study led by Carnegie Mellon University researchers that involved 8,000 elementary-school students. For 3-5 weeks, students received a small incentive for eating fruits and vegetables (a token worth 25 cents for every fruit or vegetable eaten). After this time period, rates of fruit consumption were 21-44% above baseline. The researchers hypothesized that the students created a new habit by linking school lunches with eating fruits and vegetables.

Ecker and Gilead suggest that increased intrinsic motivation – viewing the process as valuable in and of itself as opposed to a means to an end — may also help people achieve their maintenance goals. Feeling competent in a task, engaging in the task autonomously, and connecting to others during an activity all help increase intrinsic motivation to work toward maintaining one’s current state.

Ecker and Gilead conclude their report with the hope that future research finds “useful insights and practical advice regarding the daily struggle to hold on to what we have.”

Featuring the APS global collaboration on COVID-19, self-control and habit formation, and more!