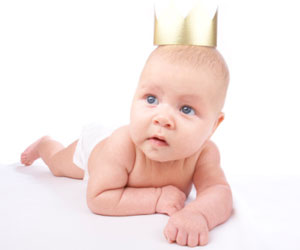 The royal baby has been named — George Alexander Louis. And that handle will have a significant bearing on the child’s future, psychological researchers say.

As Jason Goldman of the University of Southern California describes in The Guardian, children born in European nations are more likely to have popular, traditional names than children born in countries colonized by European explorers. Those findings were reported in a 2011 study published in Psychological Science.

And it appears the Duke and Duchess of Cambridge followed this naming norm, in effect safeguarding the child’s future public image.

Albert Mehrabian, professor emeritus of psychology at UCLA, has extensively researched the science of names, finding that unconventional names tend to elicit negative reactions from others. And unconventional spellings of common names don’t do the child any good either — they’re rated as undesirable as well.

“Names always matter,” Mehrabian told the Associated Press. “The public’s image of this child could quite possibly be influenced by the baby’s name.”

A name is often the first piece of information we learn about someone. And as psychology researchers Jochen Gebauer and Mark Leary wrote in their 2011 paper on this topic, “initial impressions build a strong basis for processing subsequent information about the person.”

Richard Wiseman, psychology professor at the University of Hertfordshire, found that people with traditionally royal names are viewed as favorable, successful, and intelligent.

“It can also be a sort of self-fulfilling prophecy,” Wiseman explained to the Hindustan Times. “If your name sounds intelligent, successful and attractive, you are more likely to act those things.”