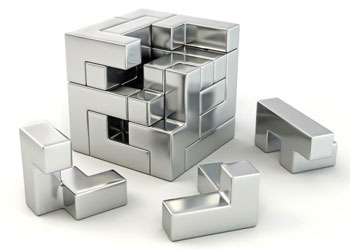 For example, consider this argument.

To explain belief bias, scientists have developed the selective processing model. According to this model, human reasoning involves a superficial, associative heuristics component and a rigorous, rule-based analytic component.  When we’re evaluating an argument, the heuristic component of the reasoning process encourages us to accept the conclusions we believe and reject the conclusions we don’t believe. The analytic component encourages us to accept or reject a conclusion based on a mental model of the argument. Even when the analytic component kicks in, it’s not foolproof because our reasoning process functions in a way that is “satisficing.” In other words, people naturally aim for “good enough” rather than perfect when it comes to logic.

Now, a group of scientists led by Edward J. N. Stupple of the University of Derby, UK, is suggesting that this model should be tweaked to acknowledge the unique reasoning processes utilized by high-logic thinkers. These thinkers scrutinize problems at an analytic level that goes beyond mere satisficing, and in a study published in the Journal of Cognitive Psychology, Stupple and his coauthors pointed out that the current selective processing model doesn’t explain what makes people give special analytical attention to some problems over others.

Stupple’s team asked a group of participants to complete a logic test and used the resulting scores to split the participants into three groups: a low-logic, high belief-bias group; a medium-logic, moderate belief-bias group; and a high-logic, low belief-bias group. The low-logic groups solved the problems more quickly and less accurately than the other two groups, and they spent the same amount of time on each problem, regardless of whether validity and believability conflicted. The medium-logic group solved the problem more slowly than the low-logic group, and took somewhat more time to answer invalid-believable problems than other problems. Finally, the high-logic group showed greater accuracy than the other two groups, and it took them significantly longer to answer invalid-believable problems than all other types of problems.

The scientists think that a sensitivity to logic-belief conflict and the unique (and time-consuming) problem-solving style of high-logic thinkers is a big part of what drives the invalid-believable argument response times for all groups. While sensitivity to logic-belief conflict may exist to some degree in everyone, the scientists write, it is most dramatic in high-logic problem solvers.

I’ve learned these methods in my critical thinking course in college. I’ve never realize just how much these different modes of argument are used on a daily basis; from relationships to financial debates. In relationships, one may form an argument over what one person was doing and why it was bad. The conclusion may be true, however the reasoning behind it can be manipulated in the person’s subjective experiences. With financial matters, who is to say that purchasing that new ‘DVD player’ or something is not an item worth splurging for. The ending of the argument will still be that money should not have been spent for the item, but this can be true or not true based on the reasons behind buying the item and whether the reasons actually may changed the original argument’s conclusion.