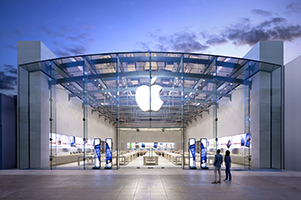 With its simple design, the Apple Inc. logo is one of the most recognizable emblems in the world. But how well do people remember details of the icon? Which way does the leaf point? Is the bitten section on the right or left side?

Psychological scientists at the University of California, Los Angeles (UCLA), under the leadership of Alan D. Castel, examined participants’ recall for these details on the ubiquitous logo, and the degree to which metamemory (i.e., confidence judgments) match memory performance.

The study borrows from a classic study that showed that people often have difficulty recognizing the correct locations of features on a US penny. That 1979 study by APS Fellow Raymond Nickerson and Marilyn Jager Adams demonstrated that people have a poor memory for items they see regularly.

To test memory for the Apple logo, the UCLA scientists gave 85 undergraduate students blank sheets of paper and asked them to draw the Apple logo from memory, then rate the accuracy of their drawing on a 10-point scale, with 10 indicating extremely high confidence.

The researchers then presented the volunteers with the real logo along with a number of similar but slightly altered icons. One of the images, for example, had the leaf leaning to the left, while another had the bite on the left. (The actual logo has a right-leaning leaf and the bite on the right side.) The participants were tasked with choosing the actual Apple logo from the various images and rating their confidence in their choice.

Although the participants generally rated their confidence in the accuracy of their drawings fairly highly, only one student accurately reproduced the logo, and just seven were able to draw it with minimal errors. Also, fewer than half of the students correctly identified the real logo from the group of apple-shaped icons they were shown.

In a second experiment, 26 students were asked to rate how confident they were in their ability to accurately replicate the logo both before they drew it and afterward. Most reported feeling very confident in their ability to make an accurate drawing, but lost a significant amount of confidence after actually completing a drawing.

The researchers suggested that “engaging in the recall task appeared to generate awareness of the difficulty in recalling the features.”

“Increased exposure increases familiarity and confidence, but does not reliably affect memory,” the authors concluded. “Despite frequent exposure to a simple and visually pleasing logo, attention and memory are not always tuned to remembering what we may think is memorable.”

Publications > Observer > Editor's Choice > The Apple of the Mind’s Eye

Why do we need to remember the logo. Only recognition is required?