If you’ve ever watched the T.V. show Monk, you know that obsessive-compulsive disorder (OCD) is characterized by a fixation on certain thoughts and a need to engage in repetitive behaviors, such as excessive hand washing or checking multiple times if a door is locked. 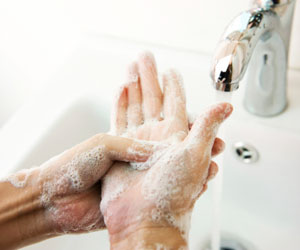 Research has shown that guilt motivates checking behavior by saddling people with feelings of responsibility. For instance, someone who checks a locked door repeatedly fears being held responsible in the case of a break-in. People may also try to alleviate guilt through physical washing, in what researchers refer to as “the Lady Macbeth effect.”

Italian researchers Francesca D’Olimpio and Francesco Mancini wanted to find out if a specific type of guilt is responsible for the kinds of behaviors commonly seen in OCD. They distinguished between two types of guilt: altruistic and deontological.

Altruistic guilt involves concern and compassion for victims who were hurt by one’s actions, which may not necessarily have broken any moral imperatives.

Deontological guilt (from the Greek word deon, meaning “duty”), on the other hand, results from a person’s belief that he or she has violated a moral code, even if no one has been directly harmed.

Based on findings from previous studies, the researchers hypothesized that making people feel deontological guilt would lead to more checking and washing behaviors than would triggering altruistic guilt.  Additionally, they expected that washing behaviors would decrease feelings of deontological guilt more than it would decrease feelings of altruistic guilt.

In both experiments, participants listened to an audio recording of a story that was meant to elicit either altruistic guilt, deontological guilt, or no guilt.  In the first experiment, participants then had to complete a task in which they sorted capsules by color into jars.  Independent judges observed how often participants double-checked their choices.

In the second experiment, participants were instead provided with a variety of cleaning materials and were instructed to clean a Plexiglas cube.  Independent judges observed how thoroughly participants cleaned the cube.

In both experiments, participants who had been induced to feel deontological guilt exhibited more checking behaviors and cleaned more thoroughly than did people who were induced to feel altruistic guilt or no guilt at all, confirming the researchers’ hypotheses.

While study participants did not have clinical diagnoses of OCD, given previous research that supports “the notion of a continuum between normal individuals and OCD patients,” D’Olimpio and Mancini are confident that the results shed light on the nature of OCD.

I ask what are the traits of someone who has killed another?