California man Mike May made international headlines in 2000 when his sight was restored by a pioneering stem cell procedure after 40 years of blindness. A study published three years after the operation found that the then 49-year-old could see colors, motion and some simple two-dimensional shapes, but was incapable of more complex visual processing.

Hoping May might eventually regain those visual skills, University of Washington researchers and colleagues retested him a decade later. In an article published in the April 2015 issue of Psychological Science, they report that May — referred to in the study as M.M. — continues to perform significantly worse than sighted control group participants. 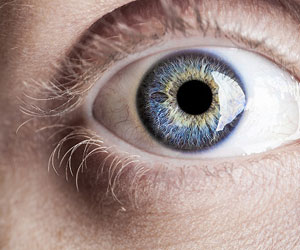 The conclusion: May’s vision remains very limited 15 years after the surgeries. Though disappointing, the results provide valuable information that can help researchers better understand how vision develops and which visual processing tasks are most vulnerable to sight deprivation.

“With sight-restoration procedures becoming more developed, we’re going to see more and more cases where people are blind for long periods of time and then get their sight back,” senior author Ione Fine, a UW associate professor of psychology, said in a UW news story.

May went blind at age 3 when a jar of chemicals exploded in his face. He went on to work for the CIA and became a successful entrepreneur, founding the Sendero Group, a company that makes GPS and talking-map products for blind people. May is also a motivational speaker and holds the world downhill skiing speed record, 65 mph, for a completely blind person.

But fully restored sight has eluded May, and his unusual case has puzzled researchers. There were few previous cases of restored vision before his — the last well-documented one was in 1963 — and scientists knew little about whether people whose sight is restored as adults can regain functional vision, and if so, how long that might take.

In the recent tests, May was shown images of household objects and faces, and also video clips while his brain responses were measured with fMRI. As with the tests a decade earlier, May did not have normal brain responses to three-dimensional objects or faces, consistent with his inability to make sense of these stimuli.

Researchers believe that’s because May’s brain, like those of other people who went blind at an early age, has adjusted to respond to other stimuli, such as sound or touch.

“We suspect that Mike lost vision at an age when these brain regions were able to take on new roles,” said joint first author Jason Webster. “It remains to be seen what these areas are doing now.”

May’s case is particularly interesting, Fine said, because his blindness started when the visual system is developed, but the ability to perceive objects and faces is still evolving.

“He lost his vision at an age when vision is pretty good, but he was still young enough for it to deteriorate,” she said.

The findings, the researchers say, indicate that visual function for tasks such as object recognition and face processing continues to develop through childhood and early adolescence and remains sensitive to loss of sight for several years afterward.

The good news, said joint first author and UW graduate student Elizabeth Huber, is that the findings imply that adults’ vision is relatively fixed, meaning that as visual losses increase in an aging U.S. population, the chances of restoring useful sight to older people are good.

“This study is encouraging because it suggests that if someone loses sight later in life, it may still be possible to restore relatively normal vision, even after many years of blindness,” she said.

May told the researchers he uses his other senses to compensate for his poor vision.

“I have learned what works with vision and what doesn’t, so I really don’t challenge my vision much anymore,” he said in the paper. “Where motion or colors might be clues, I use my vision. Where details might be required, like reading print or recognizing who someone is, I use tactile and auditory techniques.”

As has been asserted by American scientists in discussions beforehand, if we Americans do not thoroughly investigate stem cells potential benefits and drawbacks others will surely take the lead and leave us in the dust ever unsure of important applications that do or will benefit mankind.

When children learn to see, it is highly integrated with touching. A baby sees and simultaneously touches faces, toys, everything. It is socially inappropriate for an adult to feel people’s faces. But, perhaps that is what someone needs to do to interpret the visual stimuli. Is MM encouraged to touch everything? To go back to baby-mode to get an integration of the senses?