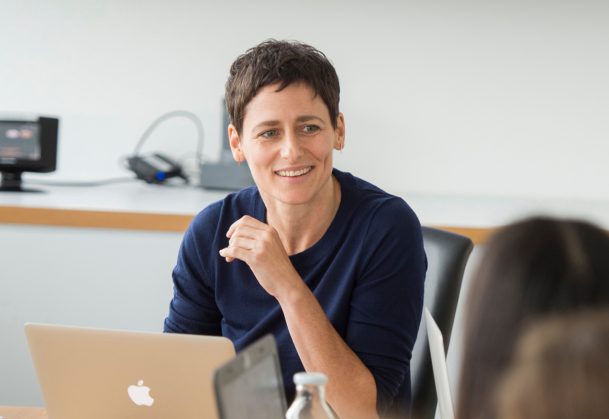 The prestigious fellowship, funded by the John D. and Catherine T. MacArthur Foundation, is awarded annually to individuals who demonstrate exceptional talent and insight in their field. In selecting MacArthur Fellows, the Foundation recognizes individuals across a wide range of professional backgrounds, from academic researchers and clinicians to artists and entrepreneurs.

In experimental fieldwork, she has traveled to post-conflict areas, including post-genocide Rwanda, to study how prejudice and conflict may be reduced. In her work in Rwanda, Paluck tested whether messages disseminated through mass media — in this case, a radio soap opera — might change how listeners perceived social norms related to interethnic relationships. She found that listening to a radio story featuring an interethnic couple led people to view such relationships as normative within a societal context. This perceived social norm, in turn, seemed to guide their behavior without necessarily altering their personal values and beliefs.

Paluck has also researched social networks in public schools, collecting data from about 25,000 students in New Jersey. Looking at students’ existing social networks, she found that anti-prejudice ideas quickly diffused throughout groups based on a few peers with the most perceived social influence.

More recently, Paluck and coauthor Margaret Tankard studied the link between institutional policies and the social attitudes and behaviors within a population. This research, published in Psychological Science, found that the legalization of same-sex marriage by the US Supreme Court was associated with increased public support of gay marriage based on perceived change in social norms.

Among the 24 MacArthur Fellows chosen this year, Paluck will receive a $625,000 stipend, which she says will help her to continue training the next generation of psychology researchers in conducting field experiments and investigating social behavior in the real world.

Betsy Levy Paluck received her PhD from Yale University. She is currently a professor of psychology and public affairs at Princeton University and the Deputy Director of the Kahneman-Treisman Center for Behavioral Science and Policy. She was named an APS Rising Star in 2011 and currently serves on the Advisory Council for the newest APS journal, Advances in Methods and Practices in Psychological Science.

You can learn more about Paluck’s research in this interview with NPR.