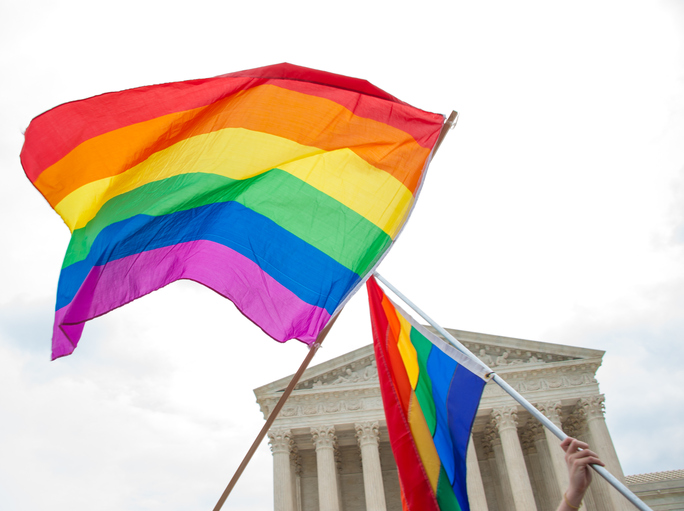 How do a person’s views change when the government takes sides on an issue? Research conducted before and after the US Supreme Court’s historic 2015 ruling on gay marriage, Obergefell v. Hodges, showed that a decision by the nation’s highest court likely changed Americans’ perceptions of social norms regarding gay marriage, even if it didn’t change their personal attitudes on the subject. The research was published in Psychological Science and received all three open practice badges for open data, open materials, and preregistration.

Perceived social norms are an individual’s understanding of others’ common, accepted behavior and opinions. “There’s a long history of psychological research showing the very powerful effects of what you understand to be common and accepted around you,” says Margaret Tankard, associate behavioral and social scientist at the RAND Corporation and co-author on the study.

Whether an opinion is actually common in a group or people just think it’s commonly held, that opinion is likely to be more acceptable to them.

According to Tankard, there are “many examples of cases where people might go along with what others are doing even if they personally are a little more hesitant, or less supportive of what the crowd or the group is doing.”

Perceived norms are often more fluid than personally held beliefs and opinions. Tankard and her coauthor, Assistant Professor of Psychology and Public Affairs at Princeton University Elizabeth Paluck, wanted to test just how malleable these perceptions and beliefs are on the subject of gay marriage. To do so, they recruited two groups prior to the Supreme Court ruling: one group read a fake “expert panel opinion” stating that a ruling in favor of gay marriage legalization was very likely, the other read a similar passage that said a ruling in favor was very unlikely. In this initial study, both perceived norms and personal attitudes toward gay marriage shifted toward greater acceptance of gay marriage when participants thought a positive Supreme Court ruling was likely.

Over the weeks before and after the actual Obergefell v. Hodges decision, Tankard and Paluck conducted a second study, in which they tested attitudes and perceived norms multiple times in a different set of subjects. In response to the Court’s ruling, only perceived norms shifted; while individuals updated their understanding of the social climate, they did not reliably change their personal beliefs or opinions.

“People’s personal opinions are wrapped up in other views that they may have,” Tankard points out, citing religious views as one example. “There’s a lot holding opinions in place that make them a little bit less readily altered.”

While this longitudinal study showed no significant shifts in beliefs, previous research has found that perceived norms can shift personal attitudes over time. According to a 2016 paper from Tankard and Paluck, perceived norms can be influenced by observing the behavior and opinions of other people (e.g., your friend George says he approves of same-sex marriage), by hearing summary information about your group (e.g., a study reveals that 62 percent of Americans support same-sex marriage), or through institutional signals (the Supreme Court rules in favor of nationwide recognition of same-sex marriage). Institutional decisions in particular reinforce the idea that society’s norms are trending in a certain direction and indicate to many people that a norm is on the right side of history, that it will be viewed favorably in the future.

For Tankard, the cultural attitude shifts regarding gay marriage sparked her desire to study it: “I think we’re at a time when there’s a lot of momentum and change happening on this issue, and we wanted to capture a small piece of how that change happens.”

A conversation between Jennifer L. Eberhardt and Linda R. Tropp on the links between intergroup contact and racial and ethnic relations.

A sample of research exploring memory for repeated images, stability and change in implicit bias, and mixed emotions toward racial out-groups.

Writing a New Story: How Narratives Can Improve Intergroup Attitudes

The real power to change people’s hearts and minds may lie in the television programs, books, and other media we consume on a daily basis.