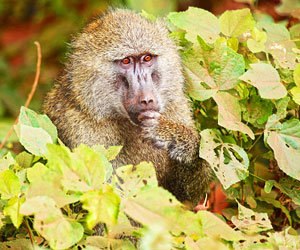 Learning to count comes early in life for humans. Most kids know how to count before they enter formal schooling and the ability to understand basic quantities is fundamental to everyday life. Researchers at the University of Rochester wanted to know whether the cognitive underpinnings for this important ability might be found in some of our close cousins: baboons.

“Nonhuman animals do not use words like one, two, and three, or numerals like 1, 2, and 3, to “count” in the way that humans do. Nonetheless, it is well established that monkeys and other animals can approximate quantities without these symbolic labels,” researcher Jessica Cantlon and colleagues write.

While research had shown that monkeys possess a sense of numerical quantity, it wasn’t clear whether they could track and compare changing quanities in real time.

“This question is important because the answer to it will indicate the extent to which the primitive quantity routines of nonhuman animals contain logical elements of human counting—an issue central to discovering the evolutionary origins of human counting,” Cantlon and colleagues explain in their article.

The researchers studied two olive baboons housed and tested at the Seneca Park Zoo in Rochester, New York —  while a sample of two might seem incredibly small, the researchers point out that only one case is needed to show that counting-like behavior is possible in nonhuman animals. Importantly, neither of the baboons had ever been trained to discriminate quantities. 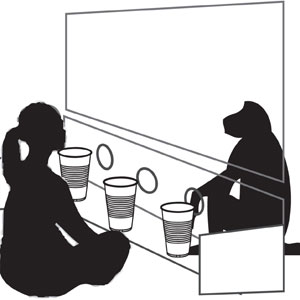 An illustration of the task apparatus.

To ensure that the monkeys understood the concept that only peanut-filled containers should be chosen, the options included a third opaque container that remained empty.

Overall, the baboons chose the container that had more peanuts in it about 67% of the time. As the researchers expected, the monkeys were better at choosing the disparity when quantities between the two containers was large. When the containers had a similar quantity of peanuts, the monkeys had a more difficult time choosing.

More intriguing, however, was the finding that on about 37.5% of the trials, the baboons physically moved over to the container that contained more peanuts before the researcher had finished filling the container. The baboons weren’t required to make a speedy decision, so they could have waited until the researcher was done. The fact that they made the spontaneous decision to move suggested that the baboons were keeping track of the number of peanuts in each container in real time.

Statistical modeling of the data suggests that the baboons were comparing the items in sequence and using a sequential logic that is similar to that seen in human counting.

“Animals can use this counting-like logic in the absence of a symbolic system of number to make approximate comparisons of quantitative values in sequence,” the researchers explain. “The fact that this proto-counting logic is present in nonhuman primates indicates that it predated counting and tallying in human evolutionary history, and perhaps was a critical piece of cognition for the human invention of formal counting.”

Publications > Observer > Observations > How Did Humans Learn to Count? Baboons May Offer Clues