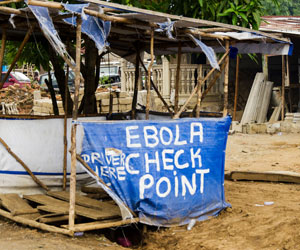 An outbreak of Ebola in the Republic of Guinea, Liberia, and Sierra Leone that began in 2014 made headlines around the world, as the number of individuals affected continued to climb.

Ebola is a viral disease that can be transmitted to humans through animal and insect bites, but can also be spread from person to person through bodily fluids. The severity of the outbreak in West Africa, combined with the knowledge that the virus could spread through human contact, led many people in parts of the world that were actually at low risk of an outbreak to express xenophobic attitudes.

“The old quote that ‘there is nothing to fear but fear itself’ rang true to us when everything started exploding with Ebola last year,” UC Santa Barbara psychology researcher David Sherman said in a UCSB press release. “We want to try to understand the psychology of that phenomenon, and so we began to look to see whether there’s a relationship between how vulnerable people felt to Ebola and their support for these xenophobic policies.”

Sherman, UCSB colleague Heejung S. Kim, and Kent State University researcher John A. Updegraff wondered whether a person’s cultural orientation toward individualism or collectivism might sway their response to a potential public health risk like Ebola. To find out, they conducted a study that surveyed 1,000 Americans, a sample that was demographically representative of the U.S. population.

As a measure of cultural orientation, participants rated their level of agreement with a variety of statements, including “It is better for me to follow my own ideas than to follow those of anyone else” (individualism) and “Learning about the traditions, customs, values, and beliefs of my family is important to me” (collectivism).

They also rated their agreement with nine statements gauging perceptions of personal risk, the local community’s risk, and the country’s risk of Ebola infection.

The researchers assessed participants’ xenophobia by measuring their prejudice toward West Africans and undocumented immigrants, their support for restrictive travel policies, and their degree of ethnocentrism.

“Collectivism is associated with a set of rules and traditions and a close relationship with others. These are all ways that help people cope with threats like scary viruses,” Sherman said in the press release. “So if you are someone who has stronger collectivistic values and you have the beliefs and practices that are associated with them, there’s less of a need to respond to these threats with xenophobia.

The findings suggest that educational interventions that promote collectivist thinking — encouraging a sense of belonging and fostering connections with others — may help reduce xenophobic responses in the face of future infectious disease outbreaks.