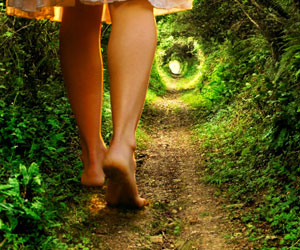 We often think about the future as being in front of us and the past as being at our back – as we walk, places we pass are behind us, and places we have yet to reach lie ahead.

But not every culture views time the same way. For instance, although the Arabic dialect spoken in Morocco refers to time in the same way that English does, previous research suggests that Moroccans have a tendency to see the past as being in front of them and the future as being behind them.

Psychological scientist Juanma de la Fuente of the University of Granada and colleagues hypothesized that differences in how we perceive time result not from language or from how our bodies are oriented, but from whether we’re more focused on the past or the future.

In the first of a series of experiments, 125 Spanish and Moroccan college students read a story and viewed a cartoon character with a box in front of him and a box behind him.  They were then instructed to pick which boxes corresponded to past and future events in the story. While most of the Spaniards associated future events with the box in front, most of the Moroccans associated that same box with past events.

De la Fuente and colleagues also looked at within-culture differences.  Data from a subsequent experiment suggested that while most young adult Spaniards see the future as lying in front, about half of elderly Spaniards associate the past with the front.  The researchers believe that this is because young people tend to think about important upcoming life events, whereas older people are more likely to reminisce about their past.

The researchers are confident that these experiments provide considerable evidence for their theory that focusing on the past or present influences how time is understood spatially.  Still, they note the complexity of how people think about time:

“Ultimately, understanding how people use space to mentally represent time will require understanding how the separable influences of linguistic, cultural, and bodily experiences combine to shape people’s minds.”