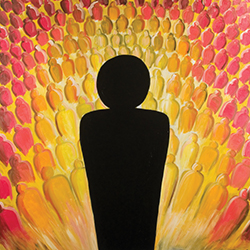 In a world threatened by extremist groups such as the Islamic State of Iraq and Syria (ISIS) and Boko Haram, many people wonder what pull such violent, fear-mongering organizations have over their followers. In a new Current Directions in Psychological Science article, APS Fellow Michael A. Hogg, describes a theory explaining why people with no previous record of violence or extremist views might be joining these causes.

Hogg proposes that “uncertainty-identity theory” — the role uncertainty plays in motivating people to join a social group to feel accepted — could be a contributing factor pushing people toward fringe groups — whether ideological, religious, or political. Furthermore, the more uncertain people feel about salient parts of their identity, the likelier they are to identify with a group — especially if the group is strongly cohesive or particularly distinctive. Such groups facilitate bonding through shared attitudes, feelings, and behavior and offer validation from in-group members, reducing uncertainty about who we are, how we should behave, and how we relate to the world around us. Based on studies in this field, Hogg notes that “self-uncertainty places a premium on identity-defining belief systems that are distinctive, unambiguous, all-encompassing, explanatory, and behaviorally prescriptive. This analysis has been applied to explain the prevalence of zealotry and the attraction of fundamentalist ideologies in times of societal upheaval and transformation.”

One other factor that Hogg says contributes to the allure of extremists groups is their tendency to have a strong, autocratic leader who clearly defines and delineates the group’s purpose — think Adolf Hitler or Osama bin Laden. Studies have shown that uncertainty leads students to increase their support for nonprototypical leaders who are less representative of the group members overall but are clearly in charge. In occupational settings, studies have found that higher levels of uncertainty lead employees to be more supportive of autocratic than nonautocratic leaders.