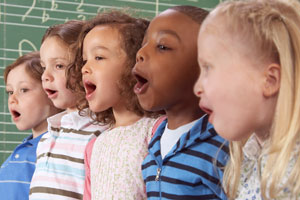 Musical skills may translate into reading skills — particularly for children with dyslexia. Research published by Martina Huss, Usha Goswami, and colleagues in Cortex indicates that musical games may be useful in treating dyslexia in young children because an inability to distinguish between strong and weak “beats” is closely related to dyslexia.

Huss and Goswami asked 10-year-old children to listen to pairs of simple songs in which certain notes were accented. To make the songs different, the scientists changed the length of the accented notes. Non-dyslexic children were able to distinguish between identical and non-identical song pairs by perceiving “rise time,” which is the time it took for notes to reach peak intensity. Dyslexic children had more difficulty using rise time to distinguish between tunes.

According to the research team, these results show that the ability to perceive the pattern of beats in music and the ability to read are closely linked. Early interventions based on music may allow children to perceive the sounds of language more efficiently, leading to greater success when they learn to read.

Non-dyslexic children may benefit from music training too: Research published by Sylvian Moreno in the October issue of Psychological Science shows that preschoolers can improve their verbal intelligence after 20 days of music-based cognitive training cartoons.