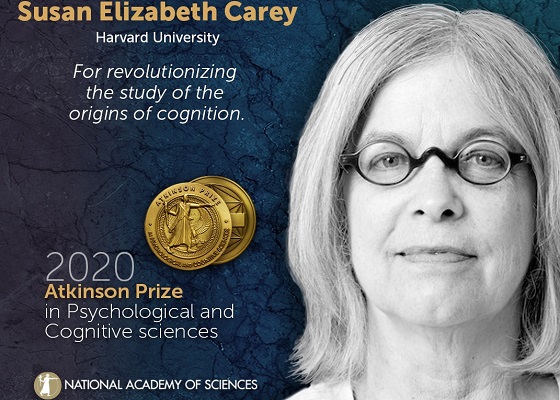 The National Academy of Sciences (NAS) has awarded the 2020 Atkinson Prize in Psychological and Cognitive Sciences to to APS William James Award Fellow Susan Elizabeth Carey for revolutionizing the study of the origins of cognition and to APS Fellow Richard N. Aslin for his groundbreaking contributions to understanding infant learning and development.

The Atkinson Prize is named for APS William James Fellow Richard C. Atkinson, an APS Charter Member whose $3.5 million grant to the NAS resulted in the creation of the award in 2013. Two prizes of $100,000 are presented biennially in recognition of “significant advances in the psychological and cognitive sciences with important applications for formal and systematic theory in these fields.”

Carey, a 2002 APS William James Fellow, is the Henry A. Morss, Jr., and Elisabeth W. Morss Professor of Psychology at Harvard University. “Carey’s research examines the fundamental question of how humans construct knowledge through processes such as face processing, social cognition, numerical representation, word learning, counting, and explanation,” noted the NAS announcement. “Her studies in all of these areas have culminated in a grand theory of conceptual change, which she detailed in her book, The Origins of Concepts.”

Aslin, a recipient of the 2016 APS Mentor Award, is a developmental psychologist and, since 2017, a senior scientist at Haskins Laboratories and Yale University. Previously, he was the William R. Kenan, Jr., Professor of Brain and Cognitive Sciences at the University of Rochester. The NAS announcement celebrated Aslin’s “landmark contributions to the study of infancy over the last 40 years, including revelations about the development of vision and speech perception, as well as the early stages of language acquisition.” His research has provided important findings about statistical learning in adults, children, and infants, and he “has helped to pioneer the use of functional near-infrared spectroscopy (fNIRS) to understand the neural underpinnings of learning and development in infants.”

Aslin, Carey, and other recipients will be recognized at the NAS’s 157th meeting on April 26, in Washington, DC.