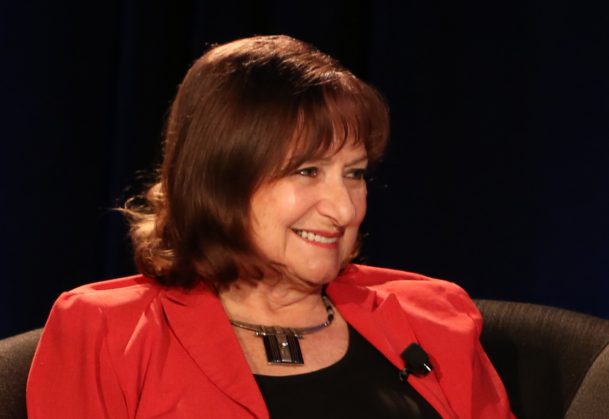 Past APS Board Member Annette Karmiloff-Smith, a world-renowned developmental and cognitive neuroscientist, passed away Dec. 19, 2016 after a long illness.

Karmiloff-Smith served on the Board for 3 years beginning in May of 2013 and was a member of the Steering Committee for the Integrative Science Initiative, which developed the biennial International Convention of Psychological Science (ICPS).

“Annette was a true force of nature,” said APS Executive Director Sarah Brookhart. “We benefitted enormously from her leadership on the Board and in so many other activities.  We have lost a dear colleague and friend.”

A Professorial Research Fellow at the Centre for Brain & Cognitive Development, Birkbeck, University of London, Karmiloff-Smith was an expert on neurodevelopmental disorders. She discussed her research career, including her years studying under the guidance of Jean Piaget, in a 2014 interview for the APS video series Inside the Psychologist’s Studio.

Before moving to the Centre, Karmiloff-Smith was head of the Neurocognitive Development Unit at the Institute of Child Health, University College London, where she studied infants, children, and adolescents with Williams syndrome, Down syndrome, autism spectrum disorders, and fragile X syndrome, across a wide variety of cognitive domains, as well as progressive developmental trajectories and the underlying cognitive processes that support them in typical development.

Karmiloff-Smith’s research found that disorders such as Williams and Down syndromes are not manifestations of damage to specific brain areas in an otherwise intact typical brain. Instead, she believed that early atypical processing has an impact on many regions, and that interactions across brain regions give rise to different developmental trajectories of brain development.

In her most recent research, she examined the risk and protective factors for adult Alzheimer’s disease at the genetic, cellular, neural, cognitive, and environmental levels in infants with Down syndrome.

Look for a collection of remembrances in a future issue of the Observer.

Though I never trained under or worked directly with Annette, she was a true leader and heroine in the field and her worked influenced me through my entire career from undergraduate to the present day. I truly looked to guidance from Annette when I got caught up in unpleasant challenges during the strong “nativist period” of the 1990’s and her leadership in the Neuroconstructivist movement. Annette never hesitated to respond kindly and wisely to a request for help and advice. In my 12 years as a faculty member in the University of California, Davis MIND Institute, one of my proudest, most enjoyable and most memorable experience was hosting Annette as a speaker in our “Distinguished Lecturer Series” (her presentations can be viewed here: http://www.ucdmc.ucdavis.edu/mindinstitute/videos/video-dls-archive.html). Annette was truly one of the most distinguished of all. She will be greatly missed but constantly celebrated

The field has lost a brilliant and inspirational scientist. Annette shaped how so many of us think about brain and cognitive development. She was transformative. She is already missed.

Annette gave a truly inspiring talk for us in April on the topic of “The Impact of Touch Screens on Early Childhood Development: is it really all bad news?” The hall at Canterbury Christ Church University was packed. I’m terribly sad to read this news. It seems impossible that someone so vibrant as Annette is no longer with us.

This is a sudden and very sad news. I never thought it would be the last when I saw her at the ICPS 2015.

I can’t add to the abundance of adjectives so aptly applied in all of these comments. Annette was all of that and more. The probing energy she brought to bear on her scientific quests bubbled over into all aspects of life. We were friends and colleagues since the seventies—in Nijmegen, Berkeley, London. The contagious smile and humor fill my mind. In an old file folder, with reprints and correspondence (including exchanges of poems we had been writing), I smiled again, after decades, to find an envelope addressed in her inimitable and graceful hand to “Professor Dan Sleaubine.” Letters mocking, or appreciating, friends and colleagues. Hilarious stories of driving Piaget to work in the mornings, along Lake Geneva, reassuring him in the face of his unexpected insecurities. And then I think of long walks on the Heath when I stayed with her in Hampstead, talking about the travails and joys of children, marriage, life. And a luxurious, month-long workshop in 1981 at the Max Planck Institute for Psycholinguistics with a dozen or more young psycholinguists and developmental psychologists, from an array of countries, probing the development of children’s temporality and narrativity. The first paper in my file folder is from 1978, from Language Interpretation and Communication. She was applying her previous experience as a simultaneous interpreter to “a functional analysis of linguistic categories and a comparison with child development.” So much of her thinking was already there. She was concerned with what she called “the experimental dilemma in psycholinguistics”—a dilemma that has remained with us. She wrote about the need to hold everything constant in experiments, while natural settings are full of “extralinguistic, interlinguistic and paralinguistic clues, as well as speaker/hearer presuppositional constraints.” Her concern was: “When experimental variables are narrowed down so that the interaction of these different factors is avoided, it may well be asked whether it is really ‘language’ that is being studied.” With her brilliant experimental sense, she strove to overcome this dilemma in her ground-breaking 1979 book, A functional approach to child language: A study of determiners and reference. She succeeded, to the extent possible, in probing children’s language in settings that approached natural settings. I’ll jump ahead and conclude these comments with memories of the 2001 meeting of the Jean Piaget Society, held in Berkeley. It was our last time together with our dear friend and colleague Liz Bates. We had been a trio from way back, and each of us had been invited to give a lecture: Annette’s (with Michael Thomas) on developmental disorders and evolutionary psychology; Liz’s on plasticity, localization, and language development; mine on relations between phylogenesis and ontogenesis in language evolution. Each of us agreed that the other had given one of their best lectures. And now they’re both gone, after having given so much (especially in Rethinking innateness, along with the remarkable team of Mark Johns, Jeff Elman, Domenico Parisi, and Kim Plunkett). We are left with a rich legacy and many good memories. (The three Berkeley lectures are in Biology & knowledge revisited: From neurogenesis to psychogenesis, ed. by Sue Taylor Parker, Jonas Langer, & Constance Milbrath; Erlbaum 2005. The book is dedicated to Elizabeth Bates.)

I met Anette at BPS Conference in 1988. I was very impressed by listening the Voice of one of the psychologists I has been explaining for years to my students at Psychology Departament in Universidad Autónoma de Madrid.
I remember myself talking with my newborn baby and asking her: ” please honey tonight you have to be a good baby because tomorrow I have to explain RR Model of KS”. My baby smiled and smiled, but she was keeping awake for hours…
When I told Anette at the BPS Meetingl, she laughed a lot and invited me to join some colleagues for a drink (the late G. Butterworth among others). Inmediately after, I told her I was a predoct student of Dan, and there was the begining of a really friendship.
I always follow her work with deep interest, trying to understand what a neopiagetian colleague could offer to a developmental “slobinian” psycholinguist. I read the book BEYOND MODULARITY hundreds of times, both in English and later in the Spanish version, I chosed it as text book for my students,
I had hundreds of discussions with Anette about Piaget and langugae, about development of metalinguistic consciousness, about the FROG STORY, about RETHINKING INNATENESS, about FODOR, CHOMSKY, JERRY BRUNER, MPI in Nijmegen, TOMASELLO, MELISSA, EVE y H. CLARK, RUTH BERMAN, ELENA LIEVEN, PAUL HARRIS, ALAN LESLIE, JOHN CHURCHER, LIS BATES, I. BERTOUD PAPANDROPULOU, etc, and DAN…always DAN.
No matter where we met around the world (London, Madrid, Barcelona, Berkeley, Nijmegen, etc) DAN had always been our umbilical reference. Thanks a lot Dan for meeting again with Anette throuhg this interview!!

Anette, i will keep talking my students about your work, about NEUROCONSTRUCTIVISM, about LANGUAGE DEVEOPMENT throgh your model, about READING DISORDERS through your model. And I will keep talking my daghter ( now 22 years and studying Psychology in Madrid) about Anette as a colleague, Anette as a friend, Anette as a real WOMAN -and therefore- as a real FIGHTER OF LIFE. Ciao Annette, we will have a good Spanish Wine somewhere sometime.
Eugenia Sebastián

Annette was a truly inspiration to very many scientists around the world. She was a lovely person and a terrific intellectual. She will be greatly missed, but her inspiration will remain for many years to come.