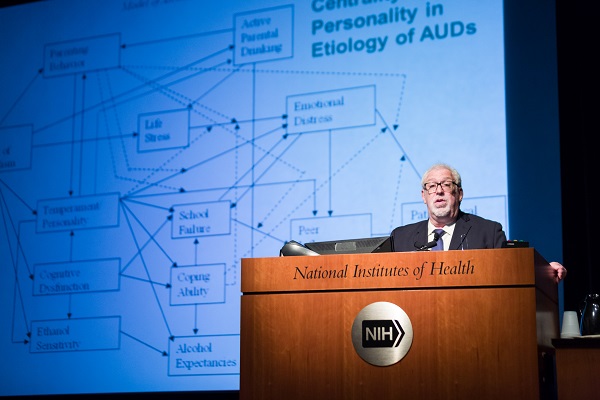 APS Fellow Kenneth J. Sher delivered the 2017 Mark Keller Honorary Lecture, one of the highest honors given by the National Institute on Alcohol Abuse and Alcoholism (NIAAA), part of the US National Institutes of Health (NIH).

Sher is the Curators’ Distinguished Professor of Psychological Sciences and the Associate Chair of Research Enhancement at the University of Missouri. His research has focused on the cause and progression of alcohol abuse disorders across the lifespan, particularly among college students. Sher’s work has explored the ways in which personality traits, family history, and gene-environment interactions influence alcohol misuse. His most recent work entails the development of new methodologies, such as computational algorithms, for the diagnosis of alcohol use disorders.

Check out Sher et al.’s upcoming Clinical Psychological Science research article focusing on the “maturing out,” or the reduction, of alcohol consumption across the lifespan.

Sher has also received numerous federal grants to conduct his research and for training undergraduate and graduate students as well as postdoctoral fellows. One of his mentoring programs, for instance, is the University of Missouri’s Alcohol Research Training Summer School (MU-ARTSS), an NIAAA-funded internship program geared towards training undergraduate students interested in the psychological science of alcohol use and dependency. To read more about MU-ARTSS, particularly from a student’s perspective, check out an April 2017 Observer article here.

The lecture is named for researcher and editor Mark Keller in recognition of his pioneering contributions to the field of alcohol research. Each fall, a distinguished scientist is invited to give a free, public lecture at NIAAA discussing their work and future directions of alcohol research. Previous Mark Keller Honorary Lecturers include APS Fellows Linda Patia Spear and George F. Koob, currently the NIAAA Director.

To read more about NIAAA’s Mark Keller Honorary Lecture Series, click here. To catch up on APS’s most recent coverage of NIAAA funding opportunities and other activities, click here.