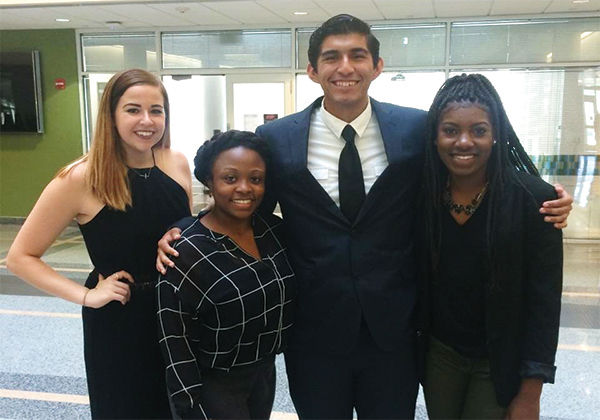 In the summer of 2016, seven undergraduate students from across the United States participated in the University of Missouri’s first Alcohol Research Training Summer School (MU-ARTSS), an internship geared toward training students from diverse backgrounds in the psychological science of alcohol use and dependency.

MU-ARTSS provides undergraduate students with an intensive research and research ethics experience and is supported by a grant (R25 AA023687) from the National Institute on Alcohol Abuse and Alcoholism (NIAAA) awarded to APS Fellow Kenneth J. Sher, who has conducted extensive research on the causation and progression of substance abuse disorders.

During the 9-week program, each student participated in a week-long lecture series followed by an 8-week lab-based internship that focused on conducting alcohol research alongside an MU-ARTSS affiliated University of Missouri (MU) professor. This internship was supplemented with collaborative lab demonstrations, discussions, and lunches focusing on research skills and professional development. Participants even attended weekly movie nights that showcased classic films about alcohol, with the goal of helping students contextualize the importance of the research in the public sphere. 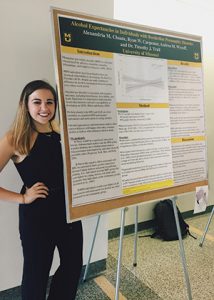 “Alcohol Expectancies in Individuals with Borderline Personality Disorder” is the title of Allie Choate’s poster.

Allie Choate, a senior psychology major at MU, had research experience in borderline personality disorder and psychopathy coming into the program. However, she sought to conduct independent research to better prepare for graduate school, as she is interested in pursuing a PhD in clinical psychology in the fall of 2017.

“It was nice to have a say on what I specifically wanted to learn.” Choate said. “[MU-ARTSS] increased my autonomy within my research and really helped me to prepare for my [Honors] Capstone.”

Choate feels confident that the program equipped her for “what’s to come” in graduate school. She said that coming up with her own hypothesis, gathering data (including real-time collection of biomarker data via smartphones), and running her own data analyses under APS Fellow Timothy J. Trull’s guidance provided valuable insight into what graduate students do on a daily basis.

The program is designed for undergraduate students interested in pursuing psychological research as a potential career path. Students are encouraged to independently propose a project, conduct literature reviews and data analyses, and give a poster presentation at the university’s undergraduate research conference, all under the direction of an expert in the field. 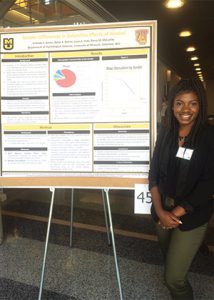 Students also receive robust methodological training. Brittney Green, a senior psychology major at Tuskegee University, investigated gender differences in subjective effects of alcohol as part of her MU-ARTSS project. In addition to getting acquainted with the relevant peer-reviewed literature, her daily activities included screening participants over the phone who had expressed interest in the lab’s study and later administering tests and alcohol under Denis M. McCarthy’s supervision at the Alcohol Cognitions Lab at MU.

The students who shared their stories with APS said that learning at least one statistical software package — such as SPSS, SAS, or mPLUS — was necessary for completing their projects, but proved to be the most challenging aspect of the internship. They all agreed, however, that learning these quantitative skills was worthwhile and will help them better prepare for graduate school and a research-driven career.

As Shanaliz Natta, a junior at the University of the Virgin Islands, St. Thomas, explained: “I get to put that on my resume.”

And while the internship’s foundation lies in psychological science, nonpsychology majors also benefitted from the program. A biology major hoping to pursue a PhD in biomedical science, Natta was initially concerned that she would not be able to apply her biology background to the internship even if she was accepted into the program. Fortunately, in working on a comparative project exploring alcohol use among twin adolescents in rural and urban areas, she realized that genetics and epigenetics bring together the biological and psychological sciences quite well.

Natta said that “learning something about a different field and making the connection between my biology field and  psychology and seeking how they correlate and help one another hand-in-hand” was one of the most rewarding aspects of the experience.

Interacting with other undergraduate students further expanded Natta’s academic network. In addition to MU-ARTSS’s lectures, film screenings, group check-ins, and lunches, the students met other undergraduates from across the United States through MU-wide summer seminars and lunch outings. Natta, who was visiting the mainland United States for the first time, found the campus community — both students and faculty — “very welcoming.”

For Samuel Valle, a psychology major at California State University, Long Beach, MU-ARTSS was one of the few undergraduate research possibilities available to students in his circumstance. Valle is part of Deferred Action for Childhood Arrivals (DACA), an immigration program that not all academic and professional opportunities currently accommodate. Fortunately, MU-ARTSS is able to accept DACA recipients, allowing Valle to work in a lab on an independent research project with experts in the field.

“A lot of the things that I was doing I have not done at all back at home,” says Valle.

Interested in quantitative and social psychology, Valle worked with APS Fellow Bruce D. Bartholow on the motivations behind drinking alcohol (e.g., drinking for enhancement, drinking to cope) and how these factors map on to alcohol consumption and its consequences. As a result of his MU-ARTSS experience, Valle hopes to continue in this line of work.

MU-ARTSS organizers attribute the success of the program in part to its emphasis on welcoming diverse groups of participants. Unfortunately for many undergraduates, particularly students from historically underrepresented communities, cost can be a barrier to attending summer research programs. Thanks to the NIAAA grant and contributions from the university, however, MU-ARTSS provided all participants with a $3,600 stipend, room and board, and even an hour of academic credit from MU. Students were only responsible for travel costs.

Needless to say, these perks were a few of the many reasons why Choate, Green, Natta, and Valle chose to participate in MU-ARTSS. As more and more universities and colleges introduce undergraduate research programs, more students from diverse socioeconomic backgrounds will have access to similar training and experiences.

And while not all of these MU-ARTSS students might pursue careers investigating alcohol use and dependency, the skills they acquired will prove invaluable as they move into graduate programs and future research careers.

As Green concluded: “I traveled to a place I’d never been to before, I got to present my research, and got to be a part of such a great program with such amazing people.”