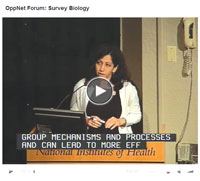 The puzzle of human well-being has occupied scientists for centuries. How do we define well-being? What factors contribute to it? How does it change over the lifespan? And, most importantly, what can we do to maximize it? Today, large survey studies are allowing researchers to delve deep into these very questions by providing access to mountains of data, collected from thousands of people.

In June, the Basic Behavioral & Social Science Opportunity Network (OppNet) at the National Institutes of Health (NIH) hosted a forum to demonstrate how such large-scale biopsychosocial surveys can be useful tools in helping investigators to examine the life course trajectories of different aspects of well-being. The forum highlighted two national longitudinal studies: Midlife in the United States (MIDUS) and the Health and Retirement Study (HRS).

MIDUS and HRS, which are supported by the National Institute on Aging (NIA), were established in the 1990s to examine how different factors — including behavioral, social, psychological, biological, economic, and demographic factors — interact to influence well-being in adulthood. These studies are noteworthy for their multi-disciplinary approach, allowing researchers to bridge the traditional gaps between lab and field.

MIDUS, directed by APS Fellow Carol Ryff at the University of Wisconsin–Madison, includes a rich array of psychosocial measures that have enabled researchers to explore the effects that various factors — such as social inequalities, life transitions, daily and chronic stress, and social relationships — have on health and aging. Researchers are using data from MIDUS to try to identify protective factors that are associated with resilience in the face of challenges.

HRS, directed by David Weir at the University of Michigan, boasts particularly robust measures of socioeconomic well-being, in addition to links to Medicare and Social Security records. HRS users are able to link health data collected by self-report to actual Medicare claims and examine Medicare use in the context of factors like wealth, family resources, and depression.

The fact that MIDUS and HRS are longitudinal studies provides researchers with the unique opportunity to examine specific measures within individuals over time. This means that researchers can look at the effects of specific periods and events, including the recent economic recession. According to Ryff, researchers will be able to examine how “stressors related to economic loss, mortgage foreclosure and financial strain, family conflict, mental health outcomes, and biological stress profiles” are related to an “economic shock that has basically changed the journey across the decades of adulthood for many people.”

Weir and Ryff acknowledge that early experiences can be important influences on later life outcomes, but they caution against giving short shrift to experiences at midlife — “there’s still a lot of action that happens later in the life course, some of which may offset some of the risk factors present in childhood,” says Ryff. Weir argues that the scientific community often overlooks the period of middle adulthood, pointing out that “there is no National Institute on Midlife.” Both Ryff and Weir emphasize the importance of examining the multiple pathways to well-being that emerge at various points across the lifespan.

Before each new wave of data collection, Ryff and Weir carefully consider which new measures to add to the studies and they make a conscious effort to ensure that MIDUS and HRS keep pace with the best available science.

In 2008, for example, HRS expanded to include collection of DNA samples. Although some might worry that adding genetic data into the well-being equation would obscure underlying social science theory, Weir disagrees: Adding genetics actually “increases our need to think about sophisticated models” that take social science theory into account. Weir believes that the behavioral and social aspects of well-being will only become more important as scientists focus on epigenetics, investigating how non-genetic factors can influence gene expression. He hopes that the genetic data in HRS can be used to develop complex gene-environment interaction models of well-being.

Ryff and Weir are encouraged by the fact that the number of registered data users for MIDUS and HRS increases every day. The two surveys have generated an incredible number of scholarly publications and have served as a critical resource for many doctoral dissertations. The increasing usage of these datasets illustrates their broad scope — despite the fact that MIDUS and HRS already have thousands of users, it’s clear there is still a wealth of information that has yet to be tapped.

Grant Funding for Research on Bilingualism and Aging

The National Institute on Aging has announced funding for research proposals on bilingualism and its impact on cognitive reserve and resilience.

These accomplishments highlight the ways in which NIH-funded behavioral and social science research has helped our understanding of human health and disease.