There are many ways to do the right thing and most of them are flawed. One can meticulously adhere to rules, for example, or eagerly perform for various incentives, financial or otherwise. We can avoid the sticks and savor the carrots.

And yet, as Barry Schwartz, the Dorwin Cartwright Professor of Social Theory and Social Action at Swarthmore College, told the large audience gathered for his “Bring the Family Address” at the 24th APS Annual Convention, within each of these conventional forms of assuring that the “right” thing is done, reside a small minefield of problems that have crippled us as a society.

As author of the 2005 bestseller The Paradox of Choice: Why More Is Less, which brought to light that choices are not good for us, Schwartz pointed out another paradox in his approach to doing the right thing.

“This talk is about how we have too little choice,” he said. “As a society, we are giving people choices when they don’t need them and depriving them of choices where they do.”

After assuring the audience that one didn’t need to know a “single thing about psychology to understand and disagree” with his talk, he explained that America was “broken.” All the most fundamental institutions of a functioning society — healthcare, education, criminal justice, banking, politics — “do not work the way that they should.” Our carrots and sticks seem to miss the point or make things worse.

To resolve the problem, one need only return to the ancient Greeks. “We need virtue,” Schwartz said. “A virtue that Aristotle referred to as ‘practical wisdom’. ” It is very simple, really. Practical wisdom is “the will to do the right thing and the skill to figure out what the right thing is.”

But when there is a will to do the right thing, it is too often subverted by conventional definitions of what the “right thing” is. As anyone who has had to respond to the question, “Does this make me look fat?” knows, telling the truth, which is heralded as a virtue from cradle to grave, is much more complicated in daily life.

“Rules often conflict, and it is often not easy to choose,” Schwartz explained. “Rules are a road map to get you to the right city but not the right street…rules make the world black and white. In reality, all situations we most care about are in various shades of gray.” 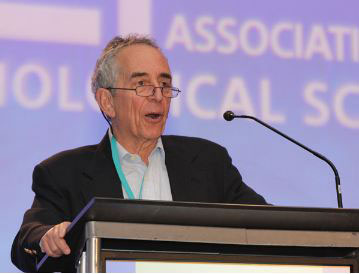 Invoking Aristotle, Barry Schwartz explains the role of practical wisdom in all parts of our lives.

Examples of those who inhabit those shades of gray and infuse them with the light of practical wisdom are all around us. Hospital janitors, for example, whose specific job description includes scrubbing floors and cleaning toilets, but whose actual work requires  thoughtful and tactful responses to families in crisis. Or a judge, whose appreciation for the human details of a crime — in which no one was injured and the criminal was a responsible man who had just lost his job — leads to a creative sentence that enables the convicted man to work and support his family while spending nearly a year of nights in the county jail.

But too often, these wise acts are threatened and undermined by overzealous rule-keepers, such as the prosecutor who got the wise judge’s sentence overturned. Instead of working to support his family, the man became a fugitive, escaping his sentence of five years in jail. He still has not been located.

“Wise people know when and how to make the exception to every rule,” Schwartz said.

Wisdom, he said, is “moral jazz.” A great jazz musician is a genius of improvisation, and so are those who are wise. Wise people also possess simple empathy and the ability to choose among virtues or rules when they conflict. There is often a choice between being honest and being kind, and wise people make the right choice.

The essential common ingredient for all of these qualities is experience. As Schwartz explained, “No one is born wise; Everyone is born with the capacity to be wise.”

That capacity, however, seems to be undermined constantly. The tyranny of the rulebook has resulted in a crippling lack of opportunity to use judgment and to sometimes fail. Learning from mistakes is the essence of learning, and yet society offers few opportunities to do just that, meeting each failure with a battery of new rules.

In our society and in our professions, wisdom must be nurtured. This approach requires relinquishing control so that others can take a risk and make a mistake. Exemplars of moral wisdom must be recognized and heralded. Virtues are not taught in a classroom, Schwartz pointed out, they are taught by example. It’s no wonder that children who want to be lawyers look to Atticus Finch, not someone doing mergers and acquisitions.

Despite the rather bleak picture of society that he painted, Schwartz assured the audience that he was genuinely optimistic about the future, and not saying that to make them happy. The two great determinants of happiness and well-being are gratifying work and gratifying connections to others. Both rely on practical wisdom to flourish. And from this, transformation of our institutions can begin.