In 1989, a 28-year-old, female jogger in New York City’s Central Park was brutally attacked and raped. Trisha Meili nearly died of the injuries sustained during the attack. But the tragedy mushroomed when five teenagers falsely accused of the crime were arrested, convicted, and incarcerated — not to be exonerated until years later. 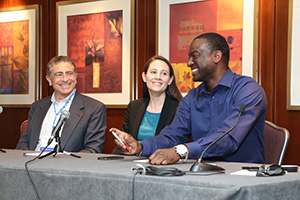 A highlight of the “Law & (Dis)Order: Psychological Science in the Legal System” program at the 2015 APS Annual Convention was a screening of The Central Park Five, a documentary film on this failure of the justice system by acclaimed director Ken Burns with Sarah Burns and David McMahon. The screening was capped by a panel discussion featuring Yusef Salaam, one of the exonerees, and Sarah Burns, who wrote the book on which the film is based.

The film chronicles the media frenzy over the arrests and trials of Salaam and four other juveniles, Antron McCray, Kevin Richardson, Raymond Santana, and Korey Wise.  It also examines some of the psychological factors — such as racial bias (Santana is of Hispanic descent, and the other men are African American), the application of physical and mental duress to coerce confessions, and the inclination to make facts fit a desired narrative rather than vice versa — that may have influenced the outcome of the case. Also speaking during the postscreening discussion was APS Fellow Saul Kassin (Williams College and John Jay College of Criminal Justice), who appears in the documentary and is a pioneer in the scientific study of false confessions.

During the talk, Salaam recounted the interrogation techniques that the police used, which led the boys to falsely confess to being involved in the assault on Meili. (None of them confessed to actually raping her.) They simply wanted the aversive interrogations to end, he explained.

In sharing his experience of being interrogated by the police, Salaam recalled hearing Wise being questioned in an adjoining room.

“They were beating Kharey in the next room — so much so that I heard him yell out, ‘Okay, okay, I’ll tell you,’” he said. “But then you look at the videotaped confessions and you think, he obviously didn’t know what he was saying.”

Thirteen years later, the men were exonerated — after serving varying amounts of time in prison — when a serial rapist named Matias Reyes, who was already serving a life sentence, stepped forward to confess to raping the jogger. His confession, unlike those of the Central Park Five, was corroborated by DNA. Last year, the city government entered into a $41 million settlement with the Central Park Five but denied any wrongdoing in the case.

In the documentary, Kassin discusses some of the motives of the police and prosecutors during the arrests and trials. Kassin explains that detectives were able to intimidate the teenagers through a combination of two commonly used interrogation processes: Confronting the suspects with assertions of guilt, yet minimizing the perceived consequences of the confession. He and Burns noted that even McCray’s father, who was in the room when the boy was being interrogated, finally told his son to simply tell the detectives what they wanted to hear.

“I think Antron’s story is sad at so many levels, but to me the most important part of the story is he had his parents in the room,” Kassin said. “And after resisting 20-plus hours of police interrogation and the demand for a confession, it was his father acting as an unwitting agent of the police.”

To read an extended interview with Salaam, click here.