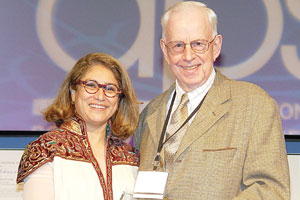 Reasoning is an ability that comes naturally to most people, and this can be demonstrated, according to psychological scientist Philip Johnson-Laird, by the world-wide popularity of Sudoku puzzles. While some people might be better at them than others, the whole point of Sudoku puzzles is that people can solve them without any formal training. Johnson-Laird, a professor of psychology at Princeton University, explored the depths of this ability to reason in his William James Award Address at the 23rd APS Annual Convention.

About thirty years ago, psychologists came to a consensus — a rare occurrence, noted Johnson-Laird — that there must be some kind of formal logic in our heads for us to be able to make the deductions that seem to come so naturally to us.

But a discovery by Johnson-Laird’s advisor Peter Wason cast this consensus into doubt. The Wason selection task, essentially a logic puzzle, demonstrated that people are better at deductive reasoning when the logic rules are formulated using familiar or previously experienced terms. That is, reasoning seems to depend, in part, on existing knowledge.

This observation is not easily accommodated by a formal rule approach, and it led Johnson-Laird to develop the mental model theory of reasoning. The theory holds that when we reason, we generate models of what is possible given not only the stated premises but also our own knowledge. Our limited working memory makes it difficult for us to think of all possible models, and this limitation, according to Johnson-Laird, is one of our biggest cognitive failures.

We also assume that our mental models only represent what is true, which can lead to systematic fallacies. Some of these fallacies are so powerful that they seem to be cognitive illusions. Such fallacies present a dilemma for theories of reasoning that involve formal rules of inference, because we shouldn’t be making these kinds of mistakes as long as we have valid rules.

Despite our many limitations, there are some aspects of reasoning that we seem to do particularly well. We understand the force of counterexamples. And we’re quick to develop strategies, like drawing diagrams, to solve groups of similar problems.

Perhaps one of our greatest strengths is our ability to explain. In one study, participants were confronted with the following puzzle: “If a pilot falls from a plane without a parachute, then the pilot dies. This pilot didn’t die. Why not?” A perfectly valid deduction would be that the pilot must not have fallen out of the plane without his parachute, but many participants relied instead on inductive reasoning to answer the question. They came up with creative explanations, like “The plane was on the ground and he didn’t fall far,” “The pilot fell into deep snow or a deep cushion,” and, Johnson-Laird’s favorite, “The pilot was already dead.” Humans are extraordinarily good at this kind of reasoning — we can explain just about anything.

Despite the seeming robustness of the mental model theory of reasoning, Johnson-Laird believes that it may well be wrong. If it is wrong, he says, someone will discover a whole set of phenomena that are counterexamples to the predictions of the model theory. But Johnson-Laird has his bases covered: “You’ll notice,” he said with a wry smile, “that as the theory goes down in flames, it will at least explain its own demise.”