At the time of her death in May 2016, neuroscientist Suzanne Corkin had marked her place in history as a leading scholar on human memory. Well-known for her investigations of the amnesic patient H.M., Corkin, a professor emerita at the Massachusetts Institute of Technology (MIT), made significant contributions to the field of cognitive neuroscience of healthy aging.

In a special symposium at the 2017 APS Annual Convention, Corkin’s colleagues and former students gathered to discuss her influence on their own careers and their thoughts on her legacy. 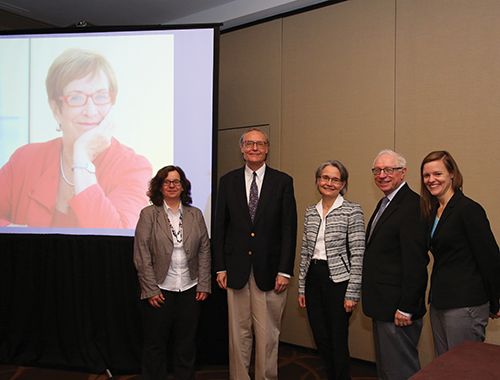 Scientists gather to remember the late cognitive neuroscientist Suzanne Corkin and reflect on the influence she had on their careers and on the empirical understanding of human memory. From left are Kim Graham, Cardiff University; John Gabrieli, Massachusetts Institute of Technology; Margaret Keane, Wellesley College; Morris Moscovitch, University of Toronto; and Elizabeth Kensinger, Boston College.

Wellesley College psychological scientist Margaret Keane, who earned her PhD under Corkin, provided an overview of Corkin’s early career, beginning with her work studying the sense of touch (somesthesis) under the supervision of APS William James Fellow Brenda Milner of McGill University. With no funds available for her research, as Milner has recalled, Corkin marched door to door in Montreal asking vendors to donate research supplies and equipment, saying it was “for the sake of McGill.” Her success in this early fundraising endeavor foreshadowed decades of securing federal grant support for her MIT laboratory, Keane said.

Corkin’s best-known research involved Henry Molaison, who was identified only as H.M. until his death in 2008. Molaison lost the ability to form new memories after undergoing brain surgery in 1953 to treat his epileptic seizures. Over nearly half a century, Corkin studied his cognitive abilities, in what was a systematic exploration of impaired and preserved memory capacities. Her findings were critical to our understanding of the role of the hippocampus in the formation of declarative memory, Keane said.

Corkin also made major contributions to the neuropsychological understanding of such neurological disorders as Alzheimer’s disease and Parkinson’s disease, said APS Fellow John Gabrieli (MIT), who studied under Corkin from 1979 to 1986, initially as a volunteer and then as a graduate student (and later a faculty colleague). All of this research contributed to a unifying framework that characterized the brain as an ensemble of interactive memory systems, specific neural circuits that support specific kinds of learning and memory, he said.

APS Past Board Member Morris Moscovitch (University of Toronto) reflected on the foundational role that Corkin’s research with Molaison played in his own work, as well as that of many other cognitive scientists.

Moscovitch, who first met Corkin in 1973, recounted during the symposium a conversation he had with her in the late 1990s, when she told him that H.M. had good semantic memories but almost no detailed episodic memories. Corkin presented those data publicly, and the findings helped bolster the Multiple Trace Theory that Moscovitch and APS Fellow Lynn Nadel (University of Arizona) advanced. That theory posited that detailed, truly episodic memories depend on the hippocampus, no matter how long ago they were formed. It challenged the standard model of systems consolidation, which held that the hippocampus is a temporary memory structure that is needed only until memories are consolidated in the neocortex.

Moscovitch said Corkin’s studies on H.M. also influenced his subsequent work with APS Fellow Gordon Winocur (Rotman Research Institute) and other colleagues showing that only those memories that are transformed over time, and lose their episodic specificity, become independent of the hippocampus — also supporting Trace Transformation Theory. Such memories become more schematic and come to rely on neocortical structures such as the ventromedial prefrontal cortex.

APS Fellow Elizabeth Kensinger described how the first studies of emotional memory that she conducted as a graduate student under Corkin laid the groundwork for the research questions that she now investigates in her laboratory at Boston College. These early studies, said Kensinger, who studied under Corkin from 1998 to 2003, hinted at a relative preservation of emotional memory in healthy aging. That sparked her interest in finding a better understanding of why there are sometimes differences in the ways that positive and negative events are remembered, she said.

Kim Graham, a memory scientist based at Cardiff University in the United Kingdom, never worked directly with Corkin, but said she was hugely influenced by her work from afar. Graham highlighted how Corkin’s pioneering work with H.M. had inspired a generation of young researchers to enter into the memory field. She said Corkin’s meticulous, thorough, and inventive papers on patients with memory loss ignited her own interest in the neuropsychology of memory.

In her talk, Graham described studies testing whether structures in the medial temporal lobe support different forms of perception and memory. Corkin raised this question in her seminal 2002 paper in Nature Reviews Neuroscience, “What’s new with the amnesic patient H.M.?”.

Graham and other presenters praised Corkin for the support she provided them and other junior researchers in the field. Her scientific accomplishments earned her such honors as the MERIT award from the US National Institutes of Health. But in writing a summary of her career after her retirement, Corkin mentioned only a single award — the MIT Undergraduate Advising Award that she received in 2011.

Her pride in that award, Keane said, mirrored her delight in all of her relationships with students and colleagues.