Getting Wise on Wise Interventions

The Two-Way Traffic Between Sexual and Relationship Satisfaction

Getting Wise About Wise Interventions

Think of a challenging goal you dream of achieving. You may fantasize about running a marathon, writing a book, or playing a musical instrument. Or if you’re even more ambitious, you might imagine winning the Boston Marathon, writing a best-selling book, or selling out arenas with your rock ‘n’ roll band. If you achieved your dream goal, how would you explain your success?

According to David Moreau, Brooke Macnamara, and David Hambrick (2019), don’t rush to thank your parents, siblings, coaches, teachers, friends, or participation in so-called wise psychological interventions (Walton, 2014). Your surroundings do not drastically improve your chances of success — they inch you toward achievement rather than giving you a mile-long head start.

To bring critical thinking into the classroom, instructors can complete the following activity. The learning objective is to teach students critical thinking and scientific literacy skills. The activity focuses on brain training because it offers the clearest and most engaging example of researchers overstating their findings.

Ask students to form pairs and answer the following questions:

Using your smartphone, laptop, or other electronic device, search for so-called brain-training programs. What are some that you found?

Now ask students to focus on the program Lumosity. After looking at this program, ask:

How much would you be willing to pay to use Lumosity for 1 month?

How likely do you think that Lumosity would improve your performance on specific activities that are similar to the ones you completed in the program? (1=not at all to 10=extremely)

Instructors will then ask the students to share their responses with the class. Which programs did students find? Why would students be willing to pay anything to use a brain-training program? What does a willingness to spend money on Lumosity say about our belief that features of our environment (parents, programs) can influence our thoughts, feelings, and actions? How much did students believe that Lumosity would offer specific benefits related the program’s activities? How likely did students believe it to be that Lumosity would offer general, psychological benefits unrelated to the program’s activities?

After reading the review, have students answer the following questions again based on how they feel RIGHT NOW, that is, at the present moment, about the questions above.

Students can then discuss with their partner why consumers and companies value client testimonials.

Finally, instructors can share with students a statement from the Federal Trade Commission, which used psychological research to show that Lumosity was incorrect in claiming that its effects would translate to improved cognitive functioning in other tasks that were unrelated to the ones Lumosity customers completed (e.g., Simons et al., 2016). Drawing on this and other research, the FTC fined Lumosity $2 million, saying:

“Lumosity preyed on consumers’ fears about age-related cognitive decline. But Lumosity simply did not have the science to back up its ads.” (FTC, 2016).

Now have students answer the same questions as last time, based on how they feel RIGHT NOW — that is, at the present moment.

Did students’ attitudes toward Lumosity change more in response to the customer testimonial or the skeptical research that brought about the FTC fine? How can people become more motivated to use psychological science to think critically about the strength of the evidence regarding programs that claim they can change their thoughts, feelings, and actions? In what ways might students use this type of critical thinking in other areas of their life?

People pursue goals because they believe that change is possible. We can shift aspects of our lives to become runners, writers, or rock ‘n’ rollers. But we would do well to temper our expectations — and explanations — for our success. Keep in mind that our unique and stable characteristics often impact our chances at least as much as any coach, training partner, or performance improvement program. The key to success involves fitting your traits to situations that shift you toward goal achievement. Nature and nurture interact.

You probably won’t win Olympic gold, write a best-selling book, or become a famous musician. You probably will end up in a spot significantly better than where you started, however. And for that, you can thank yourself, your fellows, and your environment for helping you live a happier and more meaningful life. 

Sexual relations have social significance. We can know all about the physiology of sex — that the spasms of orgasm come at 0.8-second intervals, with blood pressure up 40 or so points and respiration at 40 breaths per minute — yet miss the human bonding that both enables and grows from sexual intimacy. Good sex enhances a loving relationship, and a loving relationship enhances sex. 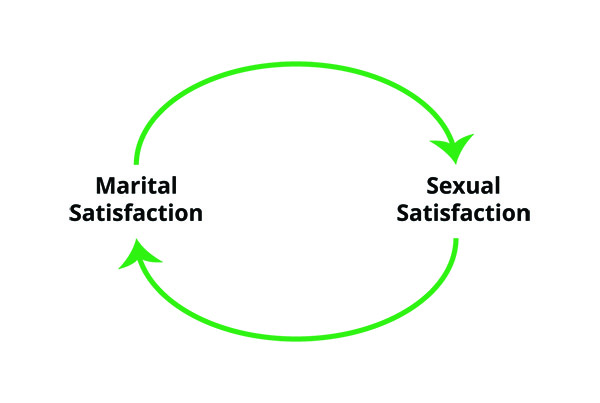 At this point, instructors could pause to ask: Why might this be? What might explain each arrow in this simple summary?

Sexual satisfaction → relationship satisfaction. Maxwell and McNulty note that sex helps bond partners by causing them to associate each other with a rewarding experience. “We come to like people who make us feel good, or who are present when we feel good.” Such includes a lingering “afterglow” that predicts enhanced relationship satisfaction (Meltzer et al., 2017). Making love — self-giving, sensitive, joyful, pleasureful love — means more than mere recreation or procreation. It is to know one’s partner intimately and then to link that partner with gratification.

Relationship satisfaction → sexual satisfaction. Marital satisfaction offers a comfortable context for sex. When a romantic relationship is sealed with a secure commitment — when there is minimal anxiety about performance, and when there is an experience-rooted sensitivity to one another’s desires and responses — intimacy can flourish. “Satisfying relationships [infuse] positive affect into sexual experiences,” say Maxwell and McNulty. And when confident of a partner’s acceptance, low body self-esteem is a diminished barrier to sexual frequency and satisfaction (Meltzer & McNulty, 2010). Couples are freer to replicate the story of Eden’s utopia, where the partners “were both naked, and were not ashamed” and delighted in becoming “one flesh” (Genesis 2:24–25).

Maxwell and McNulty also discuss the interaction of personality traits with sexual and relationship satisfaction. And they offer a model that incorporates both automatic (associative) and controlled processing. Even without exploring these workings, an instructor could invite students to respond with clickers, or to anonymously write their answers to two additional discussion questions . . . which (to respect privacy) the instructor might collect and read:

The researchers explored the bidirectional sex ← →love association in committed relationships. Would you guess the same reciprocal influence applies to casual sexual relationships? For example, would you expect the sexual afterglow affect to occur equally after 1-night hook-ups?
Some pertinent evidence:

Some studies indicate that when sex begins after a relationship progresses to a commitment such as marriage, couples experience both greater relationship stability and better sex (Busby, Carroll, & Willoughby, 2010; Galinsky & Sonenstein, 2013).

Although casual sex is, for some, pleasureful and positive (de Jong, Adams & Reis, 2018; Vrangalova, 2014), other research indicates that orgasm occurs more often, and with fewer morning-after regrets, when sex happens in a committed relationship (Garcia, Massey & Merriwether, 2012, 2013).

Would you expect the reciprocal influence of sex and love to differ for heterosexual and LGBTQ relationships?

Rosenfeld (2014) reports that the benefits of commitment — of “vow power” — apply regardless of sexual orientation. If they had married or entered into a civil union, gay and straight couples experienced almost identical stability in their relationships — and, if they had not committed, almost identical instability.

Students surely will welcome psychological insights into sex, love, and relationships. Psychological science confirms the interplay of sex and love. And it reminds us — as we can remind students — that we humans have a “need to belong” (Baumeister & Leary, 1995). We flourish when supported by enduring, close, committed, secure, intimate attachments.

Nice briefings but I would like a little more data to go with the presented conclusions. When we say the heterosexual and same-sex couples show the “same results” I would like to see “how much the same” (surely the numbers weren’t exactly the same). Numbers just help me understand the relationships between the variables and add credence to the author’s conclusions.

Psychological Science in the Public Interest (Volume 21, Number 2)Read the Full Text (PDF, HTML) Time-limited experiences such as educational interventions may have long-lasting effects and alter a person’s life trajectory, but in some instances, their effects are short-lived. Understanding the factors that influence and contribute to the persistence and More

When Psychologists Should Intervene and When They Shouldn’t
By C. Nathan DeWall
Sex Objects Are Processed Like… Objects
By Beth Morling. More